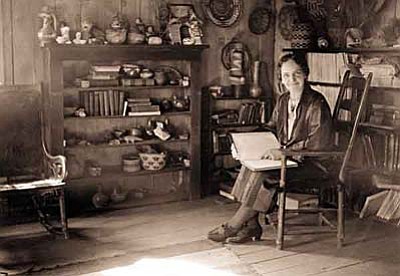 Photo courtesy Sharlot Hall Museum<br /><br /><!-- 1upcrlf2 -->Sharlot Hall sits in the territorial governor's mansion where she established Prescott's museum circa 1935. She first invited the public to visit on June 11, 1928.

It was June 11, 1928 - the date Miss Sharlot Mabridth Hall opened the doors to her new museum, with its centerpiece of the old Governor's Mansion located just down the road from the new Courthouse in downtown Prescott.

"I hope to make this building and the grounds around it a center of historical and literary interest," she wrote the previous year in asking City leaders to help establish the Museum in the building that was "home" to the first Territorial government.

In recognition of that date, Sharlot Hall Museum, 415 W. Gurley St., Prescott, will offer free admission to local residents - anyone residing in the quad-cities area - to celebrate Miss Sharlot's intent "to develop the land around the building into the most beautiful park possible, and to place upon it whatever buildings or objects may be in harmony with the original purpose."

In 2013, the City of Prescott had declared June 11 as "Sharlot Hall Day" recognizing the anniversary of the museum's opening. "Throughout the years, our local citizens have provided tremendous, ongoing support of this Museum," states executive director Fred Veil. "Opening the doors to our many local friends and neighbors is our way of showing appreciation and giving thanks."

Events of the day will include the opportunity for locals to visit the newest permanent exhibit, "Beasts of the Pleistocene," as well as the featured exhibit, "Celebrating 150 Years of the Yavapai County Sheriff's Office."

From fossilized bones of mammoths that foraged the nearby tundra 14,000 years ago, or Clovis people who settled the high country, to gallows and guns of "Law 'n' Order" county sheriffs, there's lots to see and explore on the four-acre campus.

In addition, guided one-hour tours hosted by Museum volunteers will be available at 11 a.m., 1 and 2:30 p.m., plus docents in each of the historic buildings to answer questions for visitors.

A special orientation slideshow will be shown in the Lawler Center Theater that describes the 87-year impact of the Museum within the local community, and how it has changed over the decades.

Bring the family and experience the Sharlot Hall Museum and its campus, buildings and attractions - referred to as the "Crown Jewel of Northern Arizona." Museum hours are 10 a.m. to 5 p.m., with the entry gates closing (for new entries) at 4:30 p.m.

Sharlot Hall Museum is a cultural and educational center that fosters an appreciation of the social, historical and natural aspects of Arizona's Central Highlands.