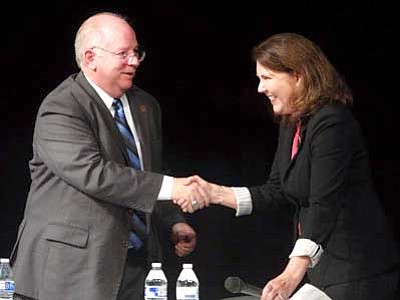 WASHINGTON - Democratic U.S. Rep. Ann Kirkpatrick said Tuesday she will challenge Republican John McCain for his Senate seat next year, launching an uphill bid to unseat the five-term senator in the GOP-leaning state.

Kirkpatrick, 65, is serving her third House term in a district she has won narrowly. She was already being targeted by Republicans for what was expected to be her House re-election bid in 2016.

Kirkpatrick's decision to try to unseat McCain is seen by Republicans as an acknowledgment that her district is soon likely to be redrawn to make it more friendly to the GOP. The U.S. Supreme Court is considering a challenge to the constitutionality of Arizona's independent redistricting commission, a voter-enacted panel that took the redrawing of lines away from the Republican-controlled Legislature.

But she dismissed that speculation Tuesday, saying her efforts weren't contingent on the court ruling. "Honestly, I represent half the state of Arizona now - and I know how much time it takes to cover just half the state and you've gotta get started early," Kirkpatrick said.

Former Arizona House Speaker Andy Tobin, who has championed the lawsuit the high court is now considering, lost to Kirkpatrick by 5 percentage points in November's election. He said Tuesday that it is too early to say if he'll try again to win the 1st District seat, especially because the Legislature is expected to radically redraw the state's nine districts to create more GOP-controlled seats this summer if the Supreme Court strikes down the redistricting law.

"It's a hard call, but I don't think that I should be jumping the gun and throwing in my hat when the Legislature may have work to do. It's premature," Tobin said.

Tobin said he believes Kirkpatrick is motivated by the looming Supreme Court decision. Justices in early March heard the case brought by the GOP-controlled Arizona Legislature and seemed likely to overturn the state's redistricting scheme.

"I think she sees the writing on the wall," Tobin said.

Republicans running the state Legislature filed the lawsuit after complaining that the commission helped Democrats by packing large numbers of GOP voters into just a few districts. The state's U.S. House delegation now has five Republicans and four Democrats, and GOP leaders say they expect at least a 7-2 split if the Legislature redraws the lines.

McCain was his party's unsuccessful 2008 presidential candidate, losing to Barack Obama. A Navy flier who was held prisoner during the Vietnam War, McCain, 78, has long been one of his party's most influential voices on military and foreign policy issues and is chairman of the Senate Armed Services Committee.

McCain announced his intention to seek re-election in April at a meeting of the Arizona Chamber of Commerce and Industry.

"With a full heart, I ask Arizonans again for their support as I seek re-election to the United States Senate," McCain told the supportive crowd. "I'm as determined as ever to deserve your trust and grateful as ever for the privilege."

His spokesman, Brian Rogers, said Tuesday that McCain welcomes Kirkpatrick to the race and looks forward to running a "vigorous campaign" no matter which Democrat he faces.

McCain, who was first elected to the Senate in 1986 and will be 80 when he seeks re-election next year, expects at least one GOP challenger. The state Republican Party's leaders, dominated by conservatives, censured McCain last year for not being sufficiently conservative, but he has brushed off the criticism.

McCain will be a formidable opponent for any challenger. He already has more than $3.5 million in cash on hand and the ability to raise much more. Kirkpatrick has a tenth that amount in the bank.

But she said she's coming off one of the most expensive House races in history and isn't worried.

"We know it will take a lot of resources to compete, not only to compete with my opponent but with the dark money that's going to come in.

"The real power's right here in Arizona, it's in our communities, I'm out there all the time. That's how I spend my time, listening to our seniors, ranchers, veterans, working families, and I'm fighting for these folks every single day," she said. "And they're telling me they're ready to have a choice in the next election."

"Ann Kirkpatrick has been part of the problem in Washington, and Arizonans are paying the price," Bozek said.