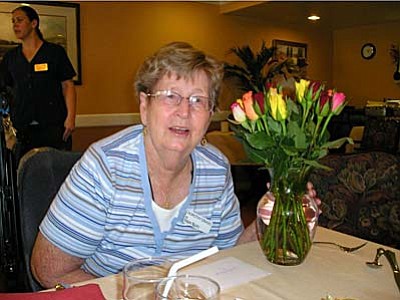 Dorothy Mae (McGehee) Drago, a Prescott resident for over half a century, passed away on April 19, 2015 in Peoria, Arizona at the age of 83. She was born on Oct. 29, 1931 in Brawley, California to ranchers Claude and Otillia McGehee.

In 1942, Dorothy moved with her family to Wickenburg, where her father became one of Arizona's pioneer cattle ranchers. She grew up working on the ranch but still managed to graduate at only 16 as the valedictorian of Wickenburg High School's Class of 1948. A diehard Sun Devil, Dorothy graduated from Arizona State University in 1952, one year after she married the love of her life and ASU classmate, John Drago. She and John moved to Prescott that same year, where they lived, worked (Dorothy as a teacher, John as a chemist at the VA), and raised a family for the next 54 years before relocating to Sun City to be closer to family in 2006. Dorothy was a loving wife and a cherished mother, grandmother, aunt and friend known for her incredibly welcoming, talkative nature (she never knew a stranger), her optimism, strength, intelligence, deep faith, community involvement and compassion for others, particularly her fellow residents at Heritage Palmeras Assisted Living in Sun City - but she always remained a true cowgirl at heart. She was deeply loved and will be deeply missed.