PHS grads roll in more than $7.6 million in scholarships 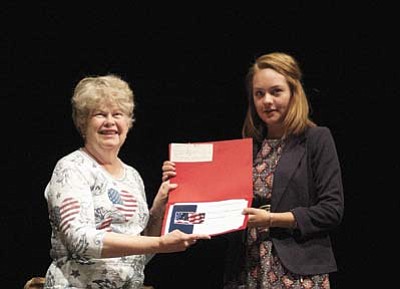 PRESCOTT - The Class of 2015 at Prescott High School surpassed their predecessors in earning more than $7.6 million in scholarships. Many seniors learned of their awards at the school's scholarship awards program Thursday night, May 21, in the Ruth Street Theatre.

"Our seniors did a great job going after these scholarships," Principal Stephanie Hillig said, adding she was amazed when the Class of 2014 tallied more than $5.7 million, so she was even happier to see this year's total.

Two of the largest awards went to Sierra Rosdahl and Hanna Mauldin, who received four-year appointments to attend the U.S. Military Academy in West Point, New York, and U.S. Naval Academy in Anapolis, Maryland, each valued in the hundreds of thousands of dollars.

The night also honored Flinn Scholar Alexandra Nguyen and 4.0 student Zane Galpin, along with a long list of Graduates with Distinction, who earned 4.0 grade-point averages with 24 or more credits and at least one Advanced Placement course.