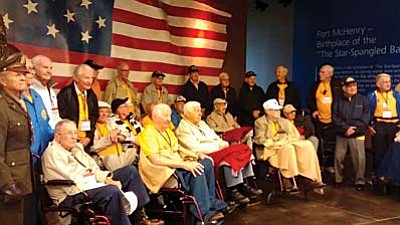 Thanks to the sponsorship of the Yavapai Chapter Daughters of the American Revolution, 30 World War II veterans traveled to Washington, D.C., with Honor Flight Arizona this past month.

All veterans fly free and receive free accommodations and meals for the three-day trip. Most have a guardian who travels with them for assistance; they pay their own way. On April 7, three ROTC cadets received a trip of a lifetime with veterans.

"The three cadets were specially chosen for their admirable qualities and scholastic abilities," Castanos said.

"I read about their service, but never sat down and had a conversations with someone," she said about the veterans. "These men have seen so much and done so much, but they are also regular guys, husbands, fathers and grandfathers."

She found herself matched up with a B-26 pilot, Donald "Corky" Korkowski, who flew 43 missions and was involved in two combat crashes - the second of which resulted in a broken back.

Merrigany said she knew Korkowski really enjoyed the trip, and liked being able to share memories with others with same - and different - experiences.

For herself, she said she could see the monuments any time, but the little moments made a bigger impression.

"It was just the small conversations, over meals, the little moments that added up to the whole experience," she said.

Merrigan had these words for anyone who is thinking about helping out on future Honor Flights.

"If anyone is ever given the opportunity to go, don't think twice. Just do it. It's an amazing experience," she said.

Honor Flight Arizona is a non-profit organization dedicated to sending northern Arizona World War II veterans to see their World War II Memorial along with other sites on the National Mall. For more information, visit the website HonorFlightaz.org, or call 928- 377-1020.