Prescott's Vet Center a place for honor, hope and healing 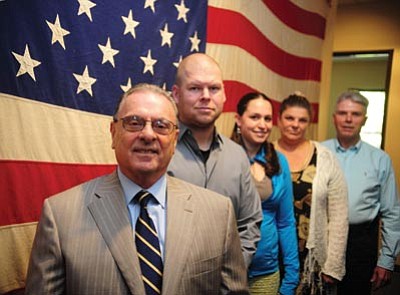 PRESCOTT - For Vietnam and fellow combat veterans, a suite of offices at 3180 Stillwater Drive has proven a safe haven where they and their families can be who they are and seek solace from the wounds of war.

The sign on the front lobby door reads, "Through these doors pass America's finest.'

This is the Dr. Cameron K. McKinley Vet Center, the first such center in the nation to be named after an individual. McKinley, chief of psychology at the Northern Arizona Veteran Affairs Health Care System from 1981 until his retirement 14 years later, was instrumental in convincing the federal government back in 1978 to open these centers across the nation. The idea was to have a place for combat veterans who needed counseling but eschewed doing so in an official hospital setting.

Prescott's center was renamed for the late psychologist on March 28, 2015.

"We want an environment for our combat veterans that is congruent with their trust issues,' said Tony Stanisci, a 1968 Vietnam veteran and Purple Heart recipient who is the center's team leader. "Every person who comes here was willing to sacrifice their life for this great nation.'

In the main group therapy room decorated with an assortment of war symbols, artifacts, and photographs, Stanisci points to one of his favorite paintings, "Reflections' by artist Lee Teter. A businessman leans against the Vietnam War Memorial in Washington, D.C., with a group of soldiers reflecting back at him.

Even the private officers are similarly decorated, the personal atmosphere conducive to conversation.

"It's intentional that we all have military mementos,' Stanisci said of the memorabilia that makes the veteran clients "feel validated.'

The $600,000 budget is funded through the federal Department of Veteran Affairs just as is the VA hospital, and the two entities do collaborate, Stanisci said. The center, though, is just for combat veterans and their families.

The focus is on readjustment from war to civilian life, Stanisci said.

The center's aim is less intensive, though both entities do cross-referral based on a clients' needs, he said.

Indeed, the premise behind Vet Centers is that they are non-hospital environments.

"We're the community's eyes and ears,' Stanisci said, noting this center is the only one in the state with a mobile outreach unit. "Vets often come here first.'

The center's staff, too, offers a degree of extra comfort as all of the therapists have marched in their client's boots.

More often than not, Stanisci hears these words, "Tony, you know how it was.'

Stanisci, a one-time electrician who in his mid-50s earned his master's degree in counseling, said he jokes with clients that he is going to "rewire them.'

"I try and rewire the neuropaths so they can be more in the here and now,' he said.

For war veterans, and their families, the war experience can be so foreign to those with whom they interact daily they lose their sense of belonging, Stanisci said.

"Like an immigrant coming to a different country, they need to understand their new world,' Stanisci said.

Civic leader Patsy Ray, co-chairman of the Vet Center's renaming ceremony for McKinley, is an enthusiastic supporter, noting though it was started for Vietnam veterans it is essential for today's returning warriors.

"To bring back our young people and plunk them in the middle of civilization, if you will, without any resources to assist them, is criminal,' said Ray, who for 10 years headed the Veterans History Project.

"I think one of the disasters of our mental health system, both for civilians and the military, is that individuals tend to feel isolated," Ray said. "They feel so alone, and no one else can understand what they've gone through. And if they don't know what resources are available to help them that only impacts their condition more," Ray said.

"So having the Vet Center is a godsend.'