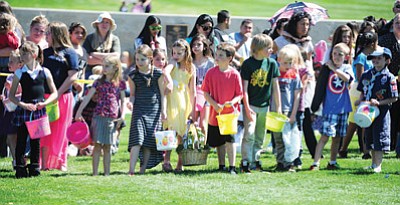 Underwear drawers and stinky sneakers are favorite hiding places for some Easter bunnies. In the Prescott area, a couple of Easter weekend events will keep that rascally rabbit hopping - and the eggs exposed to fresh air and sunshine.

Saturday, April 4, is The Great Prescott Easter Egg Hunt, with thousands of eggs scattered on the courthouse lawn for the kids to pick up. On Sunday, April 5, the Eggstravaganza at Heritage Park Zoo will offer youngsters the chance to gather thousands more.

The downtown event, a year in the making, will feature two egg hunts - at noon and 2 p.m. - as well as storytelling by Pregrine, improv performances by the Prescott High drama club and homemade carnival games. A $5 wristband allows participation in all activities, all day long.

"It's all part of the admission," said Steve Gottleib, owner of Eagle Management and Events.

His company does events for nonprofits - proceeds from the Great Prescott Easter Egg Hunt go to Boys & Girls Clubs of Central Arizona.

"This is our first year," he said, adding that they're already looking at ways to improve the event for next year.

Volunteers from Chapter 5 and the Northern Arizona Recovery Association have spent the last two weeks stuffing assorted chocolates and other candies into the 7,000 plastic eggs that will be put out for the hunt - and Gottleib said he expects the egg-stuffing to continue right up until Sunday morning.

There also will be 1,000 hard-boiled eggs, donated by Hickman's and colored by the congregation of First Baptist Church. Imagine the logistics of getting the eggs to Prescott, stored according to health department regulations, hard-boiled and then decorated.

"That takes a congregation," Gottleib said.

NARA volunteers have been instrumental as well, giving so much of their time to fill the eggs. "Without them, there's just no way," he said.

Want one? Look for eggs with a Murphy's seal, Gottleib said.

Find a full schedule for the event: http://www.chamberorganizer.com/Calendar/moreinfo.php?eventid=171565

First, planners line up sponsors. Some donate cash, some are media sponsors and others donate candy. This year's sponsors are Great Circle Media, Springhill Suites, Residence Inn by Mariott, The Flooring Shack, Costco, Wal-Mart and Safeway.

About 5,000 plastic eggs will be scattered on the lawn at the zoo's event center. The eggs were donated by Wal-Mart years ago, Brown said, adding that they're washed and reused every year.

The zoo doesn't recruit egg-stuffers. Children pick up the (empty) plastic eggs and turn them in for candy.

It takes about 30 volunteers and 12 staff members to put out the eggs.

In addition to the traditional egg hunt, folks can take part in an Easter Basket Walk. It's similar to a cakewalk, except the person standing on a number when the music stops wins a basket instead of a cake. Cost to participate, not included in zoo admission, is $1.

Last year, there were approximately 800 attendees.

Raccoons are normally nocturnal, so daytime visitors don't always get to see them. But they will get up for food, Brown said.

"They're always pretty fun," she said.

An Easter animal encounter is set for 12:30 p.m. at the event center.

Easter fun for everyone

The Great Prescott Easter Egg Hunt, 11 a.m. to 3 p.m. Saturday, April 4, on the courthouse lawn. Presented by TIM's Toyota Center and Hickman's Family Farms. Proceeds benefit Boys & Girls Clubs of Central Arizona. $5 per child (must have wristband to participate in the event).

According to the History Channel (history.com), New York City's Easter Parade tradition - immortalized in the Irving Berlin song "Easter Parade" - dates back to the mid-1800s, when the upper crust of society would attend Easter services at various Fifth Avenue churches and then stroll outside afterward, showing off their new spring outfits and hats.

Some folks carry on the tradition today, purchasing special outfits for Easter Sunday.

"I would say I get more request for boys' suits," she said. Dresses, on the other hand, sell year-round.

Rabbits, known to be prolific procreators, are an ancient symbol of fertility and new life. According to some sources, the Easter bunny came to America in the 1700s with German immigrants. Children made nests in which the egg-laying hare, "Osterhase" or "Ochster Haws," could lay its colored eggs. The custom spread and Easter morning deliveries expanded to include candy and other gifts, while decorated baskets replaced nests.

The egg, an ancient symbol of new life, has been associated with pagan festivals celebrating spring. From a Christian perspective, Easter eggs are said to represent Jesus' emergence from the tomb and resurrection.

Decorating eggs is a tradition that dates back to at least the 13th century. One explanation: Eggs used to be a forbidden food during the Lenten season, so people would paint and decorate them to mark the end of the period of penance and fasting, and then eat them on Easter as a celebration.

The largest Easter egg ever made was more than 25 feet high and weighed more than 8,000 pounds. It was made of chocolate and marshmallow, and supported by an internal steel frame.

The white House Easter Egg Roll, a race in which children push decorated, hard-boiled eggs across the White House lawn, is an annual event held the Monday after Easter. The first one occurred in 1878, when Rutherford B. Hayes was president. Some consider egg rolling symbolic of the stone blocking Jesus' tomb being rolled away.

Easter is the second best-selling candy holiday in America, after Halloween.

More than 16 billion jelly beans are made in the U.S. each year for Easter - enough to fill an egg measuring 89 feet high and 60 feet wide.

For the past decade, the top-selling non-chocolate Easter candy has been the marshmallow Peep. Pa.-based candy maker Just Born began selling Peeps in the 1950s. The originals were handmade, marshmallow-flavored yellow chicks but other shapes and flavors were later introduced.