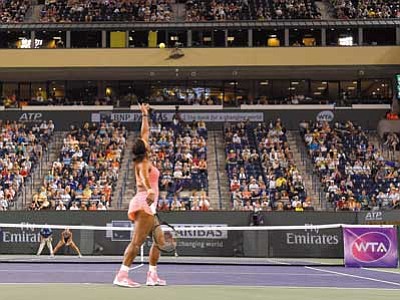 A small tournament that began 40 years ago in the Coachella Valley is today the fifth largest tournament in the world under the ownership Larry Ellison, CEO Raymond Moore, and Tournament Director Steve Simon.

Since the Indian Wells Tennis Garden opened in 2000 and continued to grow from the second largest tennis stadium in the world with seating for 16,100. The amenities include 12 broadcast booths, 44 stadium suites and an 8,000-square foot food commissary. And last year a new "Stadium 2" was born with 8,000 seats, six broadcast booths, and three fine dining restaurants.

Add in the umpires, WTA and ATP supervisors, Hawk-Eye review officials, and men and women tour players, (96 in each singles draw and 32 teams in each doubles). Add in 48 players in each men's and women's qualifying singles tournament and the magnitude of it all starts to mount.

Every year more and more people are enthralled with the tennis experience they receive, and the numbers continue to rise.

What will they add to the experience next year? Mixed doubles, 3-D large screen monitors, retired greats greeting you as you enter the grounds? Your guess is as good as mine.

The players and fans love it. The vendors, the workers, the City of Indian Wells and the Coachella Valley benefit greatly and love it. And in my mind this event has become the fifth Grand Slam.

Howard: Indian Wells event has an incredible history
Column: Can it really get any better - Indian Wells, BNP Paribas Open 2016
Column: Tennis In Wonderland at the BNP
Column: Like tennis? Watch 2017 Paribas Open
Column: One of the best events in tennis is coming soon