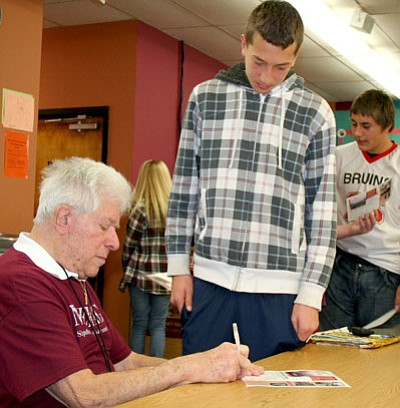 Stephen Nasser's message to students at Bradshaw Mountain Middle School was direct and to the point - and not surprising considering the Holocaust survivor's life story.

"Take your energy instead of hurting innocent people, and go study and become an important person in society," Nasser said part way through his presentation Feb. 26 at the school. "The Nazis murdered 11 million people. I don't think you want to go down that path."

Some students in the audience had already studied World War II and read Nasser's book, My Brother's Voice: How a young Hungarian boy survived the Holocaust, while others, like those in Diane Hamilton's eighth-grade English Honors class, were in the middle of reading it. For a few students unaware of wartime Europe, the concentration camps and gas chambers seemed disturbing and incomprehensible.

Nasser appealed to the youngsters to appreciate their parents and siblings because he lost his entire family at a young age.

"I would give half my life if I could hug my family. All of you have a choice," Nasser said, and encouraged students to hug their parents when they got home later that day.

"Make the best of life. You've got your family. Take your arm and throw it around your parents. And if you have enough courage, give them another hug. The second hug is from Mr. Nasser because he doesn't have a chance to hug his family. They were killed by bullies," he said.

Reinforced with slides from German archives, Nasser talked of the horrible conditions he endured in the cattle cars on the way to the camps. He and his brother soon became separated from the rest of his family members. His mother was sent to Bergen-Belsen where she died of typhus three weeks after the camp's liberation. He and his brother ended up in Muhldorf, a satellite work camp near the Dachau concentration camp.

Quickly moving through photographs of the camps, including a body chamber - "this is not a Hollywood photo" - Nasser said he was not given a tattoo with a number. While Muhldorf contained 800 prisoners at any one time, more than 5,000 died there as replacements took the place of those who could not survive the harsh conditions.

"To think that it was real, that it really happened. I didn't know that part of history. I never really thought about it," said eighth-grader JillyAnne Kelly.

Brock Gartner asked Nasser to sign a copy of the book after the presentation.

"We did learn a little bit about it in English and History. It was surprising to hear what he had to go through," the eighth-grader said.

One student asked Nasser if he had nightmares. He said he did for about 25 years.

"What helped is I started to speak, and the nightmares started to disappear," he responded.

Lily Leufkenn said hearing Nasser's story made her think about not fighting with her family. Kaylee Blundell agreed.

"What I got out of it is to not fight with my brother who's five," she said. "If he was gone, I would miss him."

Holocaust survivor: Love family, stand up to bullies
Lest we ever forget: Nasser was only one of 21 in family to survive Holocaust
Editorial: When survivors are gone, will we still remember Holocaust?
Transfixed students and educators react to Holocaust story
Auschwitz survivor tells middle school students that freedom has price