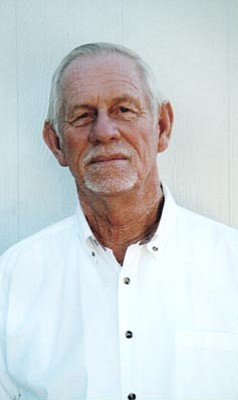 Wynne Alan Law, age 77, formerly of Prescott Valley, passed away in Las Vegas, Nevada on Feb. 21, 2015 after a long battle with cancer. His wife and family surrounded him.

Born July 4, 1937, in Elwood City, Pennsylvania, to Ralph and Edith Westner, he attended Loyola Blakefield Jesuit High School in Towson, Maryland and graduated in 1955. Wynne served in the U.S. Navy upon graduation until his medical discharge in 1958. On June 14, 1958, he married Margaret (Peggy) Carver in Texas, Maryland. He and Peggy welcomed three children into the world, daughters Edith, Rachel and son Howard.

Wynne's love of his profession, surveying took him and his family to several different places - including Maryland, Pennsylvania, Oregon and Chandler, Arizona - before settling in Prescott Valley in 1989. He worked for Yavapai County and served as the Chief of Surveys from 1990 until his retirement in 2004.

As a member of the Arizona Professional Land Surveyors, he was instrumental in sponsoring several professional surveyors as they began their careers.

Wynne was a man of many interests. An avid lover of Native American culture and history, he was certified as a para-archaeologist and ensured the preservation of many artifacts found while working in Northern Arizona. A lover of Silky Terriers, he was the proud owner, with his granddaughter Devlin, of "Petey" (Champion Anahab's Repeat Engagement) and participated in the 2004 AKC-Eukanuba National Championship. He was active as a volunteer for the Prescott Forest Rally for 15 years. He also volunteered at the Prescott Rodeo for several years.

Wynne will be remembered for his constant smile, eagerness to help others and regarding all he met as a friend. His greatest pleasures, besides his wife, were his children and grandchildren. There wasn't a BMX race, marching band competition, dog show, volleyball game or other activity he missed for his kids and grandkids. He reveled in their participation and success and loved to brag about them.

No services will be held at Wynne's request. In lieu of flowers to the family, give someone a smile, make someone laugh, be of assistance to someone. Be it big or small, those gestures are the very best way to honor and remember him.

Thanks to the staff at Compassion Care Hospice Las Vegas for their help and support.