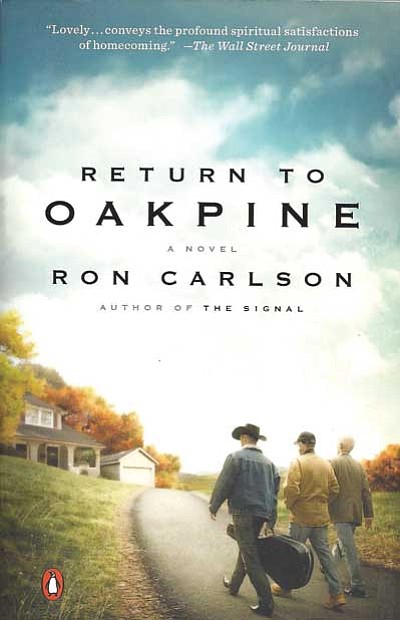 "Room Service" and "Return to Oakpine" by Ron Carlson

Called an "American master," by critics, Ron Carlson is the author of nine books of fiction, a book on writing, and most recently, "Room Service: Poems, Meditations, Outcries & Remarks," a genre-bending book that brings readers a more intimate view of the humor and fresh wit that lurks behind Carlson's masterful command of fiction. "We called room service, just to see, and they sent up a room, and it was good, so we ordered another, this time with a view, and it was lovely..." he says in his opening prose poem. In another poem, all "The Chance," he starts with "All right, we agree, a snowball gets to hell/ we don't know how, we just know it is there, in hell." Carlson is funny, poignant and penetrating in these "poems, meditations, outcries and remarks" - often at the same time.

Carlson writes with his usual spirit and grace in his latest novel, "Return to Oakpine," knitting multiple voices and perspectives together to capture the nuances of the inner lives of characters that inhabit the world of this novel. The characters are ordinary and utterly unique at the same time, the intricate and complex interactions between them held together by virtuoso prose. "Carlson can sometimes sound the music of the entire novel in a single sentence," says Alan Cheuse of All Things Considered. Indeed.

Two buddies and band members who left their hometown and became successful in the larger world reunite with the two who stayed, married high-school sweethearts and melded into small town life. But wait, lives are not that simple, and leave it to Carlson to delve into the depths and show us why. "Return to Oakpine" is heartbreaking and wholly reassuring at the same time.

Formerly director of creative writing at Arizona State University, Carlson now co-directs the graduate program in writing at University of California, Irvine. He will read and sign books at the Peregrine Book Company at 5:30 p.m. Wednesday, March 18, and give a different reading/signing at Prescott College Institute of Natural History at 7 p.m.

Peregrine Book Company is located at 219 A N. Cortez St., in downtown Prescott.