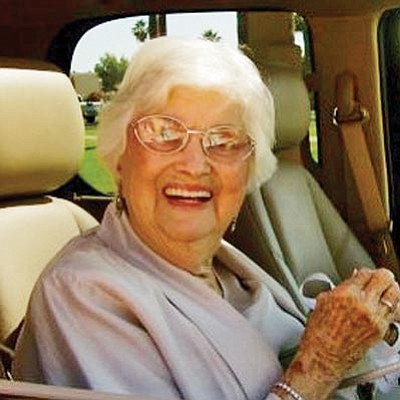 Fern (Moore) Persiani passed away peacefully at her home in Sun City West, Arizona on March 6, 2015. Born, Louise Fern in Medicine Lodge, Kansas on May 21, 1921, she arrived in Prescott, Arizona with her parents Ava and Sarah Moore in 1929 and graduated from Prescott High School in 1939.

During WWII, she lived in New Orleans and the San Francisco Bay Area where she worked in administration at the home office of State Farm Insurance and later for Fiberglass Corporation.

In 1952 she settled in Santa Clara, California and formed her own business as a fashion designer for knitted apparel. In 1969, she married Robert Persiani of San Jose, California. They enjoyed traveling in their motorhome, following the San Francisco Giants, were avid bowlers and had many happy years together before retiring to Sun City West, Arizona.

Throughout her life, she was very adept with her mind and fingers, excelling at typing, knitting and needlework and she also enjoyed teaching others her skills. In retirement, Fern took up needlepoint stitching as an art form and became prolific in her creations. She was an active member and officer of the America Needlepoint Guild and Golden Gate Stitchers. Fern also loved to play Mahjong with her friends.

Always a lover of dogs, she was particularly fond of the Pomeranian breed, and of course, her beloved Papillon "Pun'kin".