Column: Finally, some easy fixes for your tennis game 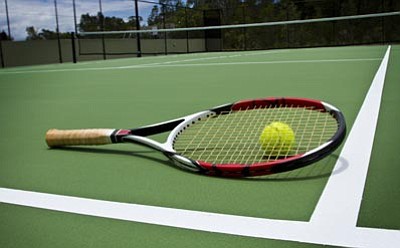 Tennis is a simple as you make it.

A few balls, two racquets, a net that stands in your way and a few lines to show you the boundaries to stay within. How hard can it possibly be?

As a beginner it doesn't take long to realize if you're going to hit the ball over the net you have to get your racquet low to the ball and hit up at it, much like an airplane coming off a runway. After making a few mistakes hitting with an open racquet face you learn it needs to stay flat if you want to keep it in. Serving with a hammer grip, tapping it in so you aren't double faulting, but slowly but surely finding out with a smooth deliberate throwing motion and delivery you can do a little better than that.

Backhands may be awful due to the fact you haven't come to terms with a grip that works, unless you happened upon a two-handed backhand, which is really a left-handed forehand. Once again, keeping a flat racquet-face and meeting the ball out in front of your body is important to your success.

Players who are brought to the net learn quickly that taking the ball out of the air is more of a block, rather than a stroke. For a good period of time most try hitting down at their volleys thinking from that close you can get away with doing that. You can't for the most part because the holes in the net don't allow the ball to go through them.

The return of serve is interesting in that it takes a while to understand you can just use your opponent's speed on the ball and use your own weight-shift and racquet-face angle to deflect it back. Just keeping the racquet out in front of your body is the main key, and keeping the racquet face flat.

To hit a lob, a fixed slightly open racquet face is needed, and more of a bunt than a swing.

For half-volleys and approach shots, keep a flat racquet face, no real backswing and a very straight follow-through.

For overhead smashes, think of a quarterback making a touchdown pas. Don't try to overkill the ball, just solid contact keeping your head up and watching the receiver, the ball.

So, I have a few sayings I use quite a lot when giving advice for tennis players of all abilities.

Never, ever, ever hit the net. It's demoralizing. It makes your opponent feel good. I don't care if it's a serve, groundstroke, volley or return of serve - do not hit the net.

Hit out, not down.

When we get excited our body seems to take on a life of its own and we exaggerate our intended motion. Take a chill pill and try to keep your excitement level to a minimum. Otherwise your racquet will be so far ahead of where it's supposed to be you'll knock many of your shots into the net, into and over the back fence, and you'll wonder, "How in the world did that happen?"

As the server it seems that you should be able to hit down into the service box. I'm here to tell you that unless you're 6'7" or taller, it's not possible. All servers shorter than that have to hit up and out at the ball to clear the net. End of story.

Positioning can make or break you, both in singles and doubles. So can analyzing your opponent's strokes and figuring out what they're good at and what they're not. That's a book in itself, but just realize a better player can lose to a lesser one when they are setting up in poor position and/or don't see what their opponent(s) are doing to beat them. It's all about strengths and weaknesses and how they size up, as well as will to win.

Practice your worst stroke until it isn't any more. Most players avoid the lousy parts of their game by running around and setting themselves up so it's tough for their opponent to capitalize on their flawed areas. Smart. But are you really working on shoring up those inadequacies?

Keep your game face and understand a certain amount of mistakes are going to take place. If you tend to blow up easily, you're only hurting yourself. Challenge yourself to maintain that self control and enjoy making fixes to your game as needed.

Do your thinking before the point begins. And then you can just work on performance when the ball's in play.

Does it all sound fairly simple? I'd be lying if I said yes. But just like anything you get good at, it takes time, hard work, patience, trial and error, some good thoughts, a bit of coaching (not too much), conditioning, and lots of laughter.

Working your approach shot; use the backboard
Column: Tricks to aid your tennis game
Universal tennis catch-phrases to be aware of
Wood racquet; responsibilities of doubles players
Column: Tennis can boil down to topspin vs. underspin