Tennessee pastor's coast-to-coast prayer walk detours to Prescott, where he got the idea 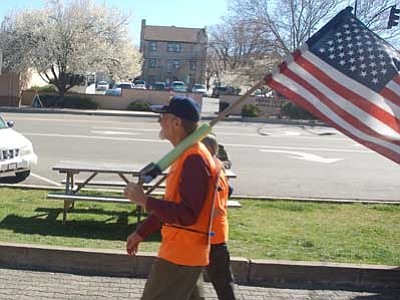 So far, Pastor Walter "Chick" McGill has covered more than 2,800 miles in his coast-to-coast walk across America. He wears a bright orange shirt, carries a large American flag and salutes passing motorists.

McGill started his journey in Kill Devil Hills, North Carolina, known for its connection to the Wright brothers, on April 23, 2014 - his 19th wedding anniversary. He plans to finish at Santa Monica Pier, California, on April 29. His goal is to promote "a new birth of freedom" and integrity in the country while calling attention to the Ten Commandments, the Golden Rule and America's founding documents.

It is, he said, the first national coast-to-coast prayer walk in history.

On Sunday, his route took a detour to Prescott so he could complete a special 10-mile prayer walk for Kayla Mueller.

He didn't know when he planned the detour that Mueller's memorial service was Saturday, but he was glad to have the chance to attend: "I haven't been to a church service in years that moved me more."

His hope is that Mueller's tragic death can inspire others to follow her example.

"Every seed must die before there's a sprout and fruit," McGill said. "Kayla is a precious seed who has died that her tree might bring forth much fruit of love and compassion."

He added: "If we can just connect with that concept, we can spread compassion worldwide."

Much like walking 3,200 miles cross-country is done one step at a time, the world is changed "one heart at a time," he said.

McGill has a special spot in his heart for Prescott - it's where he first had the idea for his TransAmerican Crosswalk. "It was mandated to me by God," he said, adding that at first he didn't want to do it. At 60-something - he's 69 now - he felt he was too old. But God wouldn't let him forget.

"So I bit the bullet and I planned it," he said. He plotted his walking route in the Prescott Library, using Google maps.

McGill, a Vietnam veteran, was in Prescott to get care from the VA hospital. He arrived in March 2013, but a backlog at the hospital and a shortage of money for housing had him living in his car. He ministered to the homeless and spent countless hours on the courthouse plaza talking to and praying with them.

In fact, it was a homeless friend who told McGill he had to end his walk at Santa Monica Pier and suggested starting it in Kill Devil Hills.

"I liked that 'kill devil' part," he said with a grin.

One of the things that draws him to Prescott: "People help people."

That was illustrated Sunday as McGill spoke on the courthouse plaza. A passerby borrowed a cellphone to call the number on the collar of a dog running loose, and then took off after the dog when it slipped its collar again.

McGill saw that spirit of compassion at work in 2013, when 19 of the Granite Mountain Hotshots died fighting the Yarnell Hill wildfire. The community - and the nation - turned out to support the firefighters' families.

"It's a resilient town. Nothing gets you down," he said. "That's what draws you to Prescott."

That spirit is one of the things McGill said he'd like to see more of in communities nationwide. And it's why he walks to promote a new birth of freedom and integrity in America.

"When you have God in society, you have a chance to have more Kaylas," he said.