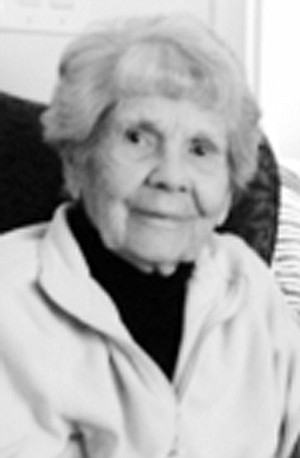 Edna Lou Richards, devoted mother, grandmother and friend, passed away peacefully on Feb. 28, 2015 in Prescott, Arizona. She was born in Missouri in 1916 to Charles A. and Jessie Gwartney Barnes.

The family moved to Los Angeles, California the following year where she grew up and married Burt T. Richards. Following his death in 1978, she moved to Merced, California where she lived until moving to Prescott in 2000. She was a PEO member and avid bridge player. She loved to travel and went on several cruises and trips outside the country.

She was preceded in death by her husband, Burt and granddaughter, Teri Lynn Teaney. She is survived by her son and daughter-in-law Tom and Carol Richards of Wickenburg, Arizona; daughter and son-in-law Susan and Vern Teaney of Mountainair, New Mexico; five grandchildren; 12 great grandchildren; and four great-great grandchildren.

Upon cremation, her ashes will be spread over the Pacific Ocean. The family will be holding a celebration of life ceremony for Edna Lou at a later date (TBD).

The Neptune Society, Tempe, Arizona is handling the arrangements.