Bridal expo puts everything at your fingertips 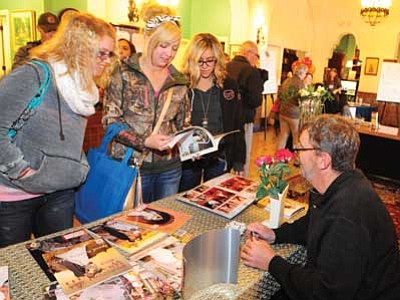 Les Stukenberg/The Daily Courier<br> Kaylee Greenleaf, Shelby McCaslin and Andreya Foley looks at some of the photo opportunities offered by Portrait Park by J at the 10th annual Prescott Bridal Affaire Expo at the Hassayampa Inn on Sunday, March 1.

Dreary skies and a cold drizzle didn't keep brides- and grooms-to-be from flocking to the 2015 Bridal Affaire Expo Sunday, March 1, at the Hassayampa Inn.

"I'm impressed," said vendor Terilyn Grover of the turnout. She and her husband, Jay, are the photographers behind A Portrait Park by J. Their photos grace the cover of Prescott Woman's bridal issue each year, and they offer a variety of photo display options, from coffee table books and canvases to prints on metal.

Photographers weren't the only vendors displaying their services at the expo. Busy brides could also sample cakes and speak with florists, DJs, event planners, potential venues, dressmakers and limo services.

In all, there were about 62 vendors, said Amore Cianciola, director of catering and events for the Hassayampa Inn.

"You can get everything you need in one day," she said.

Attendees were, indeed, on the prowl for info.

"We've only lived here for a year," said Kendall Day of Prescott Valley. She's getting married June 6 and was looking for a photographer and DJ. "It's been fun to go through and see what everybody offers."

She was at the expo with her daughter, Kristyne Pociask, another bride-to-be. Pociask will be married in October, and plans to use her 4-year-old son as ring bearer.

"It's been great to sample all the cakes, too," Day said.

Not all the attendees were about to be married, though.

Tom Rowan, also of Prescott Valley, eloped with his bride last March in Las Vegas. They were at the expo Sunday working out some final details for their March 28 reception, which they planned to include their families in the wedding excitement.

"It's good to see all the vendors in one place," said Darrell Anderson, of Prescott Valley.

Anderson and his fiancée, Katherine White, also of Prescott Valley, are getting married on May 23. While at the event, they narrowed down some photographer choices.

The couple met at a church Bible study.

"I saw her. She says I didn't catch her eye right away. I saw her immediately," Anderson said. "She made me work for it."

Their wedding will be by the lake at Fain Park. White wasn't in the market for a dress Sunday - but only because she'd just gotten one the other night.

"I think it's really cool that he came here with me today," she said of her fiancé, adding that there weren't a lot of grooms in the room. "I appreciate it."