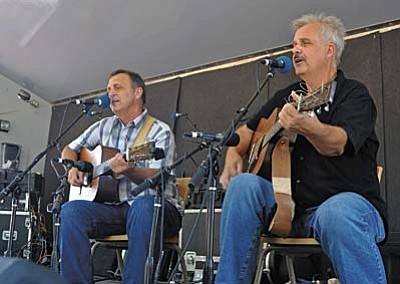 The sounds of bluegrass filled the air on the Courthouse Plaza Saturday as bands rocked out at the 34th annual Prescott Bluegrass Festival.

On Goodwin Street, bands like The Central Valley Boys, The Vintage Martins and the Burnett Family Bluegrass band played while opposite the courthouse, jam sessions dotted the lawn with returning bluegrass fans, as well as those at the festival for the first time.

Mike Thorsen said he has been coming to the bluegrass festival for four or five years and comes because it's free and he meets a lot of people. Thorsen was involved in a jam session playing the upright bass, an instrument he said he has been playing for around 35 years.

Thorsen said he loves coming to the festival to jam with people he's never played with before, noting that he started playing with a group and then other people on fiddle and banjo came over. Soon, the group was playing like they have been together for years.

Also jamming was Darren McCabe, who was playing the banjo, who was at the festival for the first time. McCabe said he came to the festival because of some friends that had bought property in the area and told him about the festival.

Having played the instrument since high school, McCabe said he likes the blues and bluegrass because of its "rawness" and something about it had always clicked with him. He also noted his interest in the structure of the songs.

McCabe mentioned what it's like playing the banjo in a jam session.

"When you're a banjo player, you've got the loudest instrument out there. When its acoustics, you have to be somewhat subtle, you're not just blaring out everybody," McCabe said, also talking about playing lead as well as backup. "Every little piece of music is exciting and interesting and you want to grasp everything, not just blow out the leads every time. Sometimes, playing backup is more fun than playing leads."

The festival continues today, Sunday, June 28, from 10:30 a.m. to 3 p.m, with more impromptu jam sessions as well as more performances by Blue Moon with John Kennedy, The Central Valley Boys, The Vintage Martins and Burnett Family Bluegrass. The final raffle prize drawing will be at 3 p.m. on the main stage.