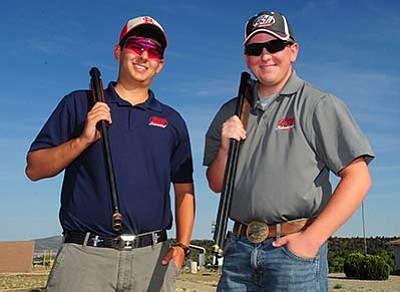 Les Stukenberg/The Daily Courier<br>Colton Underwood, right, and Joe Witty are 2/3 of the 2015 Arizona SCTP State Skeet Champions. Missing is Cole Parrish, who was at soccer practice during this shooting practice.

Competitive skeet shooting requires physical strength and an abundance of aptitudes - mental focus, timing, and accuracy among others - to fire a shotgun and shatter dish-shaped targets approximately 4-¼ inches in diameter zooming up to 60 miles per hour in different directions, heights, and distances - sometimes two at a time - as the shooter moves around eight stations aiming at 24 targets in a prescribed order.

Six years ago, 10-year-old Colton Underwood first picked up an air rifle at a 4-H Club in Show Low. He eventually enrolled in the hunter's education class offered by the Arizona Game and Fish Department (AZGFD) and joined the Scholastic Clay Target Program (SCTP), a youth development enterprise in the triumvirate of what's known as clay target shooting - skeet, trap, and sporting clays. He began practicing at the White Mountain Trap & Skeet Club.

"I loved being out on the range shooting clay birds," Colton recalls. "Once I started shooting, it just took off."

In April he won the most prestigious individual honor at the AZGFD Skeet Commissioners Cup State Championships at the Tucson Trap & Skeet Club - the High Over All (HOA) title for the best total score.

"It was the best day I ever had," says Underwood, who now lives in Prescott Valley.

He combined with Joe Witty and Cole Parrish (juniors at the time at Bradshaw Mountain High) to win the Arizona skeet title for their team, Prescott Bird Busters, with a combined score that was the second highest in state history. They missed only nine of 300 targets.

There were no victory pep rallies like those for the Chino Valley High men's soccer team after they won state championships the past two years. No "Prescott Bird Busters #1" bumper stickers or banners draped over the Prescott Trap and Skeet Club sign on Route 69 in Dewey, one of three facilities where they practice.

They shouldn't feel unappreciated. It comes with the sport.

Just ask Kim Rhode and Vincent Hancock. A modern-day Annie Oakley, Rhode never had her picture on a Wheaties box like other Olympic champions even though she is the only American to win individual sport medals in five consecutive Olympics. She won a gold in skeet shooting in London in 2012 after setting an Olympics finals record by hitting 99 of 100 targets.

Hancock never got the Wheaties recognition either after he became the first skeet shooter, male or female, ever to repeat as an Olympic champion after winning gold medals in 2008 and 2012.

Rhode, however, did get her picture on a Winchester Commemorative Ammo Box, joining John Wayne, Teddy Roosevelt, and Oliver F. Winchester as the only individuals featured on the company's ammunition boxes since 1866.

Next month Parrish, Underwood, and Witty will compete against the best amateur shooters in the country at the SCTP International Championships on July 29 in Colorado Springs where the top two shooters in each event will qualify for USA Shooting's Junior Development Team. Underwood will compete for the first in international skeet shooting, which is more difficult than the American skeet format used in the Arizona Commissioner's Cup competition. He was not eligible to shoot in international skeet matches for high school juniors and older earlier this year because he was a sophomore.

Witty, on the other hand, is a seasoned veteran.

Witty recently returned from the Olympic Training Center in Colorado Springs with his father Brian, the Bird Busters' head coach. Joe got a chance to size up his skeet shooting talents against shooters from Central and South America as well as the best in the US in the National Olympic Selection Championships.

"I've got a lot more work to do," says Joe, wearing his blue USA Shooting shirt. "It all goes back to the basics: driving with my legs, following through (keeping the muzzle moving after each shot), and not slowing down. I really enjoy traveling, meeting different people, and trying to be the best of everyone that day. You have to do what it takes to be one of the best. You have to devote yourself to what you love."

Joe uses a Beretta over-under (one barrel setting on top of the other) 12-gauge shotgun in competition. Finding the right shotgun "is kind of like a suit tailored to fit you," says Coach Witty. While Joe found one to his liking quickly, Underwood has gone through five different shotguns in six years to find a comfortable match.

"There's a number of factors to get right," coach Witty says, "including the dimensions of your face and arm length, all working in concert with your body size. Each plays a critical role in how a shotgun fits you."

The Prescott Bird Busters have more than doubled in size in the six years Witty has been coaching. The squad has grown from 23 to 49 shooters, ranging from fourth grader Andrew Molina - who won the rookie division skeet in his first competition last December - to Josh Beauchamp, a sophomore at Yavapai College who won the men's skeet in the collegiate division at the ACUI Lower Western Conference American Championships in February.

"These kids are our best marketing piece," coach Witty says. "We're thankful for the opportunities and leadership that the Arizona Game and Fish Department provides and our local support that enable our team members to reach their goals."

Many of the shooters travel twice a week to practice at the AZGFD's Ben Avery Clay Target Center in Phoenix which has facilities for international skeet and trap (called Bunker Trap) and sporting clays that the Prescott Trap & Skeet Center lacks.

"When I see him shoot, I think some day that will be me," Underwood said.

For more information on the Prescott Bird Busters, visit www.prescotttrapandskeetclub.com.

Ed Wisneski can be contacted at edwisneski@hotmail.com.