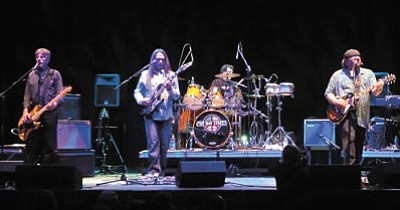 It's been a "Long Time Gone" but the "Wooden Ships" are seeing "Daylight Again" as Lonely Street Productions presents "Love the One You're With," a salute to Crosby, Stills, Nash & Young. Starring Five Way Street at the Elks Theatre and Performing Arts Center on Sunday, June 28, the show elicits nostalgic feelings for the 1960s and '70s.

The leader of Five Way Street, Mike Serres, said that the band didn't originally start out as a tribute band, but as a classic rock cover band.

"We started playing around with a couple of their (Crosby, Stills, Nash & Young) songs," Serres said. "And we just started doing these harmonies... over the course of time, we started adding more and more material to our repertoire and then decided we could pull enough material together to actually do a tribute show."

Serres said all the band members have been playing music since they were little, noting that it was a natural thing to do throughout their lives. The original covers, he said, were songs that people knew, but weren't the go-to pieces every cover band was doing. Serres said this tribute show is a way to set Five Way Street apart.

Serres stated that he loves it when he and the others harmonize and the music goes another step higher, adding that he still gets goose bumps when he sings with his bandmates. He also spoke of one time when Five Way Street met David Crosby.

"We had the good fortune of meeting him a few years ago," Serres said. "He was really generous with his time and very encouraging; he basically said to 'go out there and make it your own.'"

And Five Way Street has made the songs their own. Serres said the band has found live versions of certain songs different from the radio versions, and the group has based their renditions on those versions. He noted that while people still recognize the song, it's tweaked to give an open jam feel or have a little more live energy.

Serres said he can remember sitting at home listening to the "Four Way Street" album all over again, calling it a magical mix of different styles. He said the music still holds up after all those years.

"There's something in the show that will resonate with everybody," he said, adding that the show came to Prescott three or four years ago and the crowd loved it.

Tickets are also available at the door one hour prior to show time.