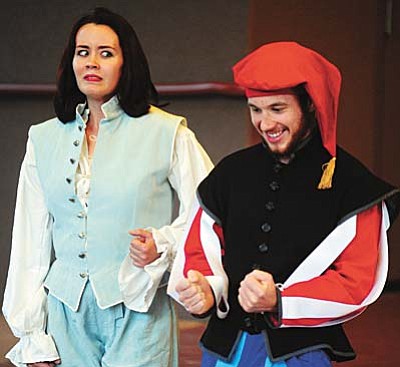 Les Stukenberg/The Daily Courier<br /><br /><!-- 1upcrlf2 -->Reva Howard as Rosalind reacts to a joke made by Touchstone played by M. Justus Burkitt during a dress rehearsal of Shakespeare in the Pines presents Laark Productions As You Like It. The production runs June 26 and 27 at the Highland Center for Natural History on Walker Road. Tickets can be purchase online at www.highlandscenter.org.

If all the world's a stage, men and women merely players, then it's always a good time to put on a Shakespearean show. And on Friday and Saturday, June 26-27, The Highlands Center for Natural History and Laark Productions will present "As You Like It" as the second annual "Shakespeare in the Pines" fundraiser. Starring Benjamin Allen Douglas Lamb, Loring Snyder, Ian Burkitt, Michael Clesceri, Reva Howard, Ayla Bowman, Ron Hammer and many others, the show will have more seats available than there were last year.

Highlands Center Marketing and Communications Coordinator Cynthia Jones said that "Shakespeare in the Pines" started last year ago due to a group of volunteers known as Party with a Purpose, which Jones said do different kinds of fundraising events. She said they originally did opera before going with Shakespeare.

Jones said she believes the idea to do "As You Like It" this year came about because "most of the play takes place in the forest and the natural venue of the Highlands Center really lends itself to the play."

While Jones wasn't sure about how much was raised through last year's "Shakespeare in the Pines," she did say that it sold out at 100 seats. This year, she added, there will be 20 more seats at both productions and said that they are looking to sell out again.

"It's fantastic direction," she said, noting that there is a lot of interaction with the audience. "The actors are so good, they thrive on this kind of drama."

Tickets are $60 and are available online at www.highlandscenter.org or call 928-776-9550. All proceeds support nature-based educational programs for children.