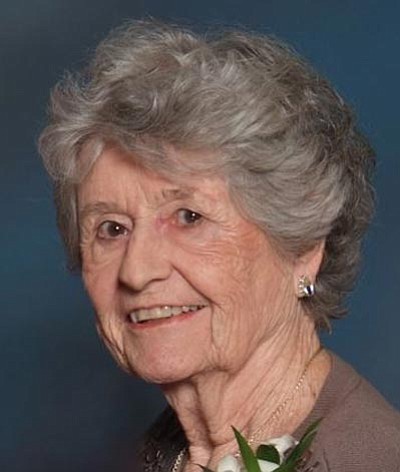 LaVonne passed away on June 2, 2015 in Las Vegas, Nevada. She was born June 14, 1931 in Bismarck, North Dakota to Edward and Azeeta (Goben) Bohrer. The family moved to Mandan and then to Bismarck where she graduated from Bismarck High School in 1949.

She married Arlo Claud Beattie on Dec. 28, 1951. Arlo and LaVonne were always a team. Arlo began his architecture business and LaVonne took care of the house and rode herd on their three boys as well as the reception, typing, and bookkeeping at the office.

They moved to Prescott, Arizona in 1980 and began building their dream home on 10 acres just outside of town. The majority of the work was done by the two of them and their masterpiece was completed in three years.

LaVonne was active in her PEO club and also found her hidden talent late in life. She did extensive china painting which decorated their home.

She is survived by her brother Paul Bohrer and his wife Gayle of Greeley, Colorado; her three sons Bruce of Las Vegas, Nevada, Brent (Andrea) of Redding, California and Brian (Sharon) of Bismarck, North Dakota; as well as her grandchildren, Amy Beattie and Laura Beattie, both Las Vegas, Nevada, Lucas Beattie and Ben (Dana) Beattie, both of Sacramento, California, Jade (Jeff) DeSmidt of St. Louis, Missouri and Davis Beattie of Fargo, North Dakota; and five great grandchildren.

LaVonne was preceded in death by her husband of 61 years Arlo; her parents Edward and Azeeta; her sisters Betty Martin and Carol Bethk; and her great grandchild Logan.