Smoki Museum: Teaching the past, understanding the present 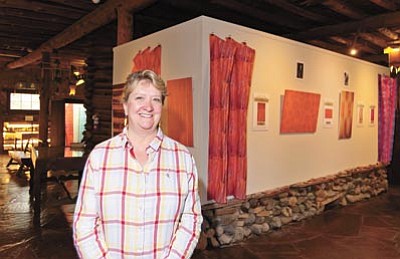 Museum Director Cindy Gresser said that there's quite a lot to see in the museum, starting with the archaeological collection that began in 1935. She said a lot of the collection is local, which is what makes it interesting.

"To many scholars, they come and can see one of these pots, but they can't see all of these pots and see what it took to get to that stage," Gresser said. "The pottery collection here is pretty unusual ... part of the uniqueness of our collection is the localness that we have and how much of it we have."

Gresser also noted the museum has stone tools, called lithics, Kachina dolls and split twig figures, which she said a lot of people know about, but many don't get to see.

The museum also has its own mystery, Gresser said, mentioning two stone ram heads found at the rodeo grounds in 1935. She said their purpose and why they were there is unknown. "There's lots of questions surrounding them and until we are significantly better funded, we really can't do any research to find out more about them," she said. "But they are very old and cool."

But the museum doesn't just focus on the past. Gresser said it also has exhibits that switch back and forth from archaeology to contemporary Native American Art, the latter of which she said is really what the Smoki Museum is more and more about these days. She said the goal is for people to be educated on Native American culture and history, but for them to understand that Native American culture is still alive and hasn't gone away, nor will it. Rather, she said, it's expanding, changing and morphing.

The museum's current exhibit is on Lloyd "Kiva" New, who Gresser said was a Cherokee man who went through Indian Schools and was connected to his own culture. She said that after World War II, he took his cultural information and started using it to create fashion designs. Gresser stated that between 1946 and 1962, New had a brand called Kiva Fashions in Scottsdale. And in 1962, the Institute of American Indian Art invited him to be the organization's artistic director, which Gresser said he left his brand to teach Native American kids what he knew.

"In this exhibit, we pair the master works with the student artworks to get some contrast and show his influence," Gresser said, adding that New inspired many other Native American designers and crafters.

The exhibit coming after the New exhibit, Gresser said, is called "Connections Northwest Southwest," dealing with the story of Paquime, which she said is the southernmost ruin in Chihuahua, Mexico. Gresser said that it is part of the Pueblo world and that the Hopi people along with those who build pueblos in New Mexico knew that there was a pueblo to the south, which is where they acquired macaw feathers and copper. Gresser said the exhibit will talk about all of the trading from the Northwest and Southwest long before there was ever a border.

As for the future, Gresser said that she sees the museum having a unique position, noting that the museum's American Alliance of Museum Assessor, Dr. Marti Allen, once said that the museum is a "microcosm of social evolution; its reformation has global implication and is an inspiration to all museums."

Gresser said she hopes to continue to tell the museum's story so other museums aren't afraid to embrace the past, and use it to teach.

"I see us becoming more as a cultural center, integrated with our museum work," Gresser said. "I see us as being a place where Indian culture and Anglo culture meet and where the complexities of relationships can be talked about in a respectful and meaningful way."