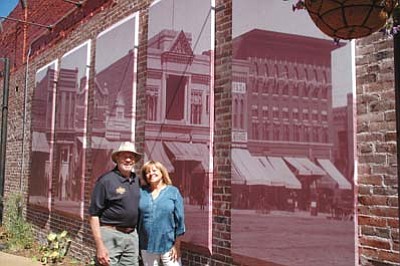 Cindy Barks/The Daily Courier<br>Owners Howard and Nancy Hinson stand in front of the large photo mural that serves at the focal point on the brick wall of the newly-opened Holiday Courtyard on Whiskey Row in downtown Prescott. The Sharlot Hall Museum photo is a historic shot of Whiskey Row, circa 1905. The new outdoor venue is being managed by the Grand Highland Hotel, which is located next door.

PRESCOTT - As Nancy Hinson watched fire consume the historic building she and her husband owned on Whiskey Row, she doubted the prediction that a bystander offered about the long road ahead.

"The night of the fire, someone told me 'it's going to take you three years,'" she recalled. "I didn't believe it."

This week, as Howard and Nancy Hinson look back on the past years of plans, permits, building, and inspections, she allows that the prediction turned out to be accurate.

The Hinsons received their certificate of occupancy from the City of Prescott on May 27 for the new Holiday Courtyard of the Grand Highland Hotel. Just days later, the first event - a wedding with 300 guests - took place in the outdoor venue.

The completion occurred just weeks after the three-year anniversary of the May 8, 2012 fire that destroyed the building and the three businesses it housed - the Bird Cage Saloon (since relocated on Whiskey Row), Pearl's Place Café, and the Prescott Food Store.

The fire also caused significant smoke damage to the Hinson's next-door building, which housed the Jenny Longhorn store and the upper-level Highland Hotel. Both of those businesses were renovated and reopened - in late 2012, and spring 2013, respectively.

That left the burned-out lot at 150 S. Montezuma St. to be dealt with. Although the Hinsons initially planned a replacement building, they later scaled back to a gated outdoor courtyard that would be available for a variety of events, such as weddings, reunions, music performances, and fundraisers.

This week, the Hinsons met at the site and pointed out the various features - strings of overhead café lights zigzagging toward the back of the lot, a stage for bands and ceremonies, a paver-and-stabilized-decomposed-granite surface, and landscaping islands featuring tall aspen trees and native rocks.

And immediately upon entering the gated entrance, the eye is drawn to the focal point, a 26-foot-wide mural replicating a photo of historic 1905 Whiskey Row. The display, which includes five four-foot-by-10-wide panels takes up much of the brick wall of the next-door building.

"All of the components really came together, even better than we anticipated," Nancy Hinson said, noting that the space was designed by architect Bill Otwell, and built by contractor Savage Development and Rock 'N' Earth Landscaping.

Part of the plans include opening the venue as a walkway for public access between Whiskey Row and the Whiskey Row alley. The Hinsons say they are still working out the logistics, but that they plan to have the walkway open soon. They also are in discussions with three vendors who might have booths in the space during business hours.

To introduce the space to the community, the Hinsons are planning five fundraisers, coinciding with the 4th Friday Art Walks throughout the summer. The events will begin with a grand opening on Friday, June 26. A portion of the profits will go to the Boys and Girls Clubs of Central Arizona.

Gates will be open from 5 to 10 p.m., with an entry fee of $5. Wine, beer, sodas, and wood-fire pizza and salad from Park Plaza Liquor and Deli will be available for purchase.

The event schedule was a point of debate by the Prescott City Council this past week, when audience and council members questioned whether such liquor service at special events unfairly competed with established bars and restaurants.

City officials pointed out that the Courtyard venue is limited to 12 public liquor-license events per year.

The Hinsons say they likely would stay within that limit for events that would serve liquor to the public. Other private events, such as weddings and reunions, would not be included in that limit, they say.

Prescott City Manager Craig McConnell said Friday, June 5, that the limit pertains to events that require liquor licenses for sale of alcohol to the public.