Down home fun: More than music at Folk Arts Fair 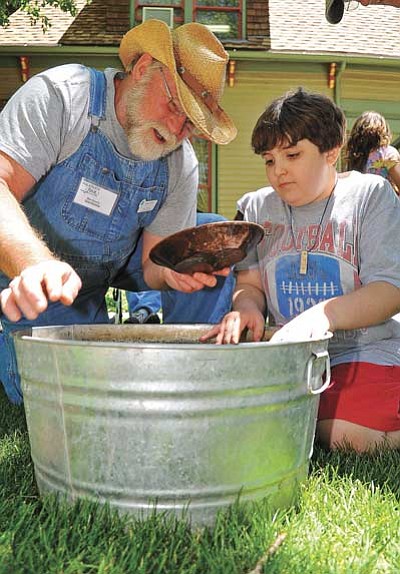 Take a trip back in time this weekend with the Sharlot Hall Museum. No, not back to the time of the dinosaurs, that's too far and this isn't Disneyland's train. This trip is back to pioneer days as the museum presents its 42nd annual Folk Arts Fair on Saturday and Sunday, June 6-7, featuring crafts, trades and amusements of the past.

Media and Marketing Manager Ken Leja said that the fair began as an outgrowth of the museum's demonstrations of life in the pioneer and territorial days, turning it into more of a fair with exhibitions and people performing tasks that were prevalent at the time, such as sheep shearing and basket weaving.

"That was in the middle of the '60s when there was this kind of contra-culture trying to move forward with and keep some of the things that were of simpler life," Leja said, noting that he was in his later teenage years and early '20s during the time of the inaugural fair.

Leja said the fair is pretty much the same as last year, noting that there will be the same amount of crafts, such as spinning, weaving, quilting and chair caning. Program Director Mary Melcher said that there will also be international folk dancing, woodworking demonstrations and fiber dying. Women will also show hair art and millinery.

However, the present crafts aren't only limited to those done by adults. Melchers said there are a lot of crafts kids can make, like making cornhusk and yarn dolls and tin punching. She said kids can also build a brand and gold pan.

Leja also stated that there will be some of the games typically played in the past, croquet being one of them.

And with all the period activities, Melcher said that there will also be "People dressed in 19th century costumes."

But where the fair stays the same, there's also a couple of differences. Leja stated that this year's fair has a lot more musical presentations than there were last year.

"Last year, there were only a handful of musical acts," he said. "This year, we've got one act in particular who's doing four sets."

The fair's music this year also includes Gail Steiger, who Leja said is big in Western music and storytelling and will be performing on Sunday. Melcher mentioned Loren Russell, a member of the Native American Pima people, who will play the flute and tell stories of the Pima people.

The petting zoo is also returning for the young people after not having been a part of the fair last year.

For the full schedule and times, see Page 16 of today's edition of Kudos.