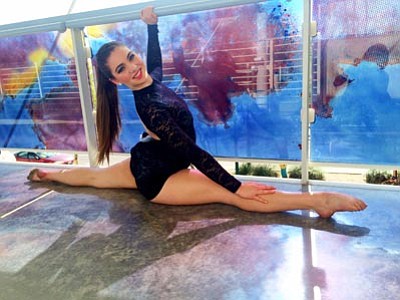 It doesn't take much to identify a film when the only aspect offered is its music. Just take "The Imperial March" from "The Empire Strikes Back" or "Gonna Fly Now" from the "Rocky" films. And many of those familiar soundtrack selections will come to life on Friday and Saturday, June 5-6, as The Dance Studio presents "Movies & More."

Featuring the award-winning RhythMotion Performing Company and all of the dancers from the Prescott and Chino Valley studios, this is also the company's 20th Anniversary Show.

Owner and Artistic Director Donna Casey said that the desire to do a show like this comes from her love of movies.

"When people talk about their hobbies, besides dancing, I love going to movies," Casey said. "I love the music in movies."

And when it comes to how the selection of pieces for the dancers to perform, Casey noted that all of the teachers have their own vision and that the style of dance they teach helps them decide. However, she said that the reason the show is called "Movies & More" is because the opening number is from "42nd Street."

Casey also spoke highly of the kids performing in the show, using the words "amazing" and "incredible" as ways to describe them.

"These kids have come 150 percent since last August," Casey said. "The more awesome the technique, the more they want. They've come a long way this year."

What's more, Casey also said that many of them are good enough to be in a professional company at this point. And that amount of talent, she said, will have the audience walking away happy and glad to have seen such a show. But it's also goes both ways as Casey said the dancers thrive on a big audience.

This show also marks the 20th anniversary of The Dance Studio, Casey said, noting her excitement.

"It speaks to the longevity of the dance studio," she said. "It's pretty amazing."

In a separate email, Casey wrote that not only has the studio been around for 20 years, but that she has owned it for the entire time. The email also stated that both studio locations reach more than 250 students, teaching jazz, tap, ballet, pointe, lyrical, contemporary, hip hop, mini and primary at both locations.

"Movies & More" will be at the Yavapai College Performing Arts Center, 1100 E. Sheldon St., at 6 p.m. Friday. Tickets are $15 and are available at ycpac.com or at The Dance Studio locations, 1 Kingswood Drive or at 990 N. Highway 89, Suite 1A in Chino Valley.