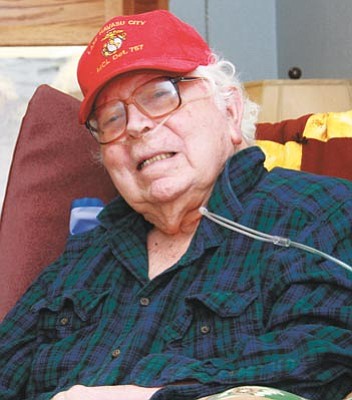 PRESCOTT - World War II Marine and Iwo Jima survivor Lee Dortsch is a true American hero, a Silver Star and double Purple Heart recipient proud of his deeds but prouder still of those who, unlike him, never returned from battle.

"I was honored to wear my country's uniform and give it the best I had,' declared the 92-year-old gentle bear of a man who is hard of hearing and requires oxygen that causes him to speak in a hoarse whisper. His mane of silky white hair curls under the back of a bright red "Lake Havasau' baseball cap.

Despite failing health that requires he be confined to a wheelchair, Dortsch talks fondly of his decision as a 19-year-old Utah youth to join the Marines so he could fight the Japanese.

On his birthday in April, Dortsch was feted by family, friends and fellow Marines at the Community Living Center of the Northern Arizona Veteran Affairs Health Care System where he is a patient. They sang a robust version of the "Marine's Hymn' with the lyrics that include "From the Halls of Montezuma...'

"I wanted to go," said Dortsch of his decision to join the Marines just months after the bombing of Pearl Harbor. His own father, Leo, was a member of the U.S. Army's First Calvary.

"Pearl Harbor really teed us off.'

Dortsch is far more reluctant to talk about his bravery at Iwo Jima in early 1945 as a member of the Fifth Division Marines - he was part of the first wave of some 30,000 Marines to invade the island.

Seventy years have passed since his company of 177 men were deployed on the ash-covered island where some 22,000 Japanese were burrowed into caves, virtually invisible to the Marine forces until they started firing their machine guns.

The horrors of the longest battle in the Pacific, though are still too raw for Dortsch.

"I don't know what to tell you about it,' Dortsch said. "It was hard ... I think of all the guys I knew who didn't make it, and I still see them in my minds' eye.

On Dortsch's third night after the invasion, he and a fellow Marine were attacked as they slept in their foxhole by four Japanese, staff reported. The enemy soldiers slit his friend's throat, and started bayoneting him, staff said. Dortsch fought back, and a fellow Marine tossed a grenade that exploded just beyond their "foxhole' that wounded the enemy soldiers who then retreated, staff said.

Lee was one of only 21 of his company to survive the Iwo Jima invasion.

The Iwo Jima invasion was not his first battle, nor did it signal the end of his military career.

Upon joining the Marines, Dortsch' first choice was to be a pilot. Instead he was ordered to Camp Pendelton in California where was trained as a "scout sniper.' His first ship deployed to the Pacific and the invasion of Guadalcanal.

Dortsch was stationed at Guadalcanal for just eight months before he suffered bayonet wounds during hand-to-hand combat, Dillinger said.

"The injuries Lee sustained would have ended military service for most men, but Lee was only starting his military career,' she said.

In 1951, Dortsch joined the U.S. Air Force where he became a pilot.

"I got tired of walking,' Dortsch jokes.

For seven years, he flew missions all over the world, including reconnaissance missions in Vietnam, VA staff said. He even piloted the late comedian Bob Hope to entertain troops in North Africa, staff said.

As for how he wants history to remember him and his comrades, those who returned and those who sacrificed all on foreign soil, Dortsch said, "I want them to think we were the right group doing the right thing.'