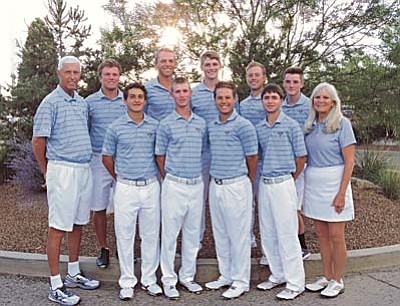 In addition to winning the Cal-Pac Conference championship for the 2014-15 academic year, Embry-Riddle Aeronautical University's men's golf team in Prescott has now been recognized for posting the highest collegiate grade point average among its national peers with a 3.75 overall mark.

Embry-Riddle coach Kim Haddow said in a news release that she "could not be more thrilled" for her National Association of Intercollegiate Athletics (NAIA) squad in receiving the prestigious award from the Golf Coaches Association of America (GCAA).

"To win this award is one of their team goals each year and they are well deserving as a result of their commitment academically," the coach added. "We are a family here at Embry-Riddle, and all of our faculty and staff play a role in supporting our athletes academically, athletically and personally."

"We are so proud of our scholar athletes that compete at the highest levels, both on the field of play and in the classroom," Embry-Riddle Prescott Chancellor Dr. Frank Ayers said in a news release. "The fact that our Cal-Pac Conference champion golfers have earned this national academic recognition comes as no surprise."