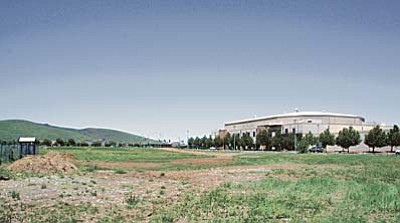 Trib Photo/Sue Tone<br /><br /><!-- 1upcrlf2 -->The owner of this vacant piece of land south of the PV Event Center and between Lake Valley Road and Main Street is asking the Town Council and Planning and Zoning Commission to amend the General Plan 2025 to allow a gated community of 260 luxury apartments in three-story blocks. The PV Community Garden and a remote control park now exist to the left of this photo.

The Prescott Valley Town Council and the Planning and Zoning Commission are once again looking at amending the General Plan to allow construction of 260 luxury apartments on 9.5 acres south of the Prescott Valley Event Center and Florentine between Main Street and Lake Valley Road.

The Prescott Valley Signature Entertainment, LLC, applied for the amendment and a zoning variance in order to build high-density, multifamily units in a gated community - a density of about 27.25 units per acre.

The conceptual drawing shows 12 clusters of three-story apartment buildings surrounding a pool and clubhouse with about 350 parking spots on the grounds and another 100 or so to be located somewhere off-site.

Richard Parker, Town of Prescott Valley's community development director, said at a joint council/planning and zoning commission meeting July 16 that this project first came to the council 17 months ago. Due to a number of issues, including parking, traffic flow and noise, loss of commercial revenue, water availability, ingress and egress, and General Plan and zoning changes, the application didn't proceed at that time.

While the conceptual drawing may change "drastically" from a future final site plan, the issue before the council and P& Z Commission is the suitability of the multiple family use at this particular site, Parker said.

At the Jan. 2, 2014, meeting, commissioners expressed concern about changing the Mixed Use Low Intensity designation - permitting both commercial and residential - in the General Plan to High Density Multiple Family, which will eliminate commercial and retail business. They wondered what impact the loss of revenue generated by sales tax from potential businesses would be to the Town's budget.

Parker said in lieu of the lost revenue from 9.5 acres of retail space, the town would assess a 2 percent surcharge on rental fees the property owner will charge. This has occurred with other large apartment complexes in town, he said, and he believes the property owner would build the surcharge into fees paid by renters. He did not have specific numbers available.

The need for more housing in Prescott Valley is borne out by the 99 percent occupancy rate and waiting lists at many apartments and property management agencies.

In addition, Town Manager Larry Tarkowski has been in discussion with Northern Arizona University for a possible expansion of the Allied Health and Nursing programs that could be situated near Yavapai Regional Medical Center East. If it were to occur, that, too, would need a General Plan amendment, Parker said.

"Richard said 'if.' That's incorrect," Tarkowski said. "It's a question of when."

In that case, the council and P&Z Commission would need to look into rezoning for construction of dormitories.

Brad Fain, of Fain Signature Group, owner of the property, said he wants to create spaces where people want to stay.

"Right now, there's no reason for people to linger," Fain said, adding that a more viable place for people to stay and linger creates a better environment for business transactions with ED tenants.

People can live, work and play without getting into a car, he said.

Summary notes from that meeting state that "All present saw the benefit of having residential within walking distance of entertainment, grocery stores, banks, restaurants, etc., as an asset to the surrounding business owners and the area."

They also discussed the viability of investment opportunities, a preference for no low-income housing, expressed support for being a gated property; and asked about ingress/egress and parking.

The conceptual drawing provided to council members shows one entrance/exit at the south side of the project boundary. Council asked about the "extreme emergency access" points along Lake Valley and on the south side as shown on the January 2014 initial conceptual plan, which put the entrance on Main Street to the north.

They also asked about off-site parking, which is not indicated on the conceptual drawing. Parker said conceptual plans are subject to change and those details will be worked out in the future site plan.

Water availability is not an issue, he added, as commercial projects are included in the town's total water portfolio.