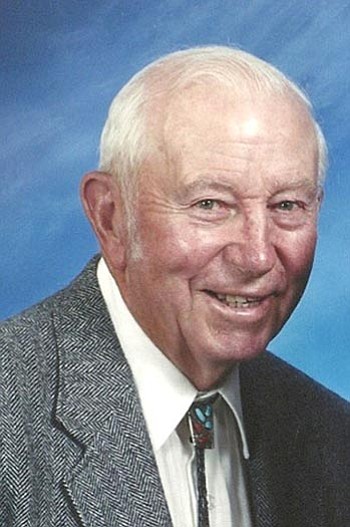 Edwin Conrad William Leiding was born to William Henry Leiding and Bertha Marie (Tietje) Leiding on May 23, 1919, near Ceylon, Minnesota (Tenhassen Township). He was baptized and confirmed into the Lutheran (Missouri Synod) faith at St. Paul's Lutheran Church in Wilbert, Minnesota.

After attending District 17 country school for eight grades, he joined his father in farming. In 1941, he was called to serve in the U.S. Army. During his 4 ½ years, he served in Normandy, Northern France, Rhineland , Ardennes, and Central Europe as a Field Artillery Observer. He was discharged in October 1945.

On Dec. 27, 1941, he married Bernice Marie Wenzel. After his discharge from the Army, they settled on a dairy farm between Dunnell and Ceylon, Minnesota. They were blessed with two sons and three daughters. In 1970, the family moved to a farm near Estherville, Iowa, until they sold it and moved to the town of Estherville. Edwin worked in construction until 1979. He lost his wife, Bernice, in 1976.

Edwin held high his love for God and country. While raising his family, Edwin was involved with church duties and held various offices at Our Savior's Lutheran Church in Ceylon. He also held membership with the American Legion and Veterans of Foreign Wars organization serving as Post commander of the Ceylon Legion Post 529 and VFW 3388 in Estherville. He was proud of the fact he donated 11 gallons of blood in his lifetime.

Mr. Leiding passed away peacefully at home on July 22, 2015, at the age of 96 concluding a 10-year journey through Parkinsons Disease.

Edwin is survived by two sons; Bruce of Dallas, Texas; Alan (Chris) of Orono, Minnesota; three daughters, Carol (Harold) Saddoris of Prescott Valley, Arizona; Lana Leiding and Lois Leiding both of Tumwater, Washington; and two stepdaughters; Louise (Robert) Weeks of North Las Vegas; Sally (Steve) Hernandez of Prescott Valley, Arizona; three grandchildren; 5 step-grandchildren and 3 step-great grandchildren. He was preceded in death by his parents, his three siblings; and stepson, John Fischer. In lieu of flowers, memorials are preferred to Trinity Lutheran Church in Prescott Valley or the Parkinson Network of Arizona for use by Prescott Parkinsons Support Group. www.parkinsonnetworkaz.org.

A memorial service will be held at Trinity Lutheran Church, Prescott Valley on Saturday, Aug. 15, at 10:30 a.m. More info: www.ruffnerwakelin.com