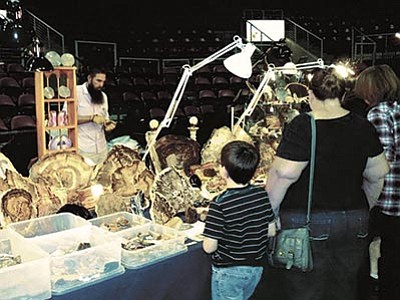 When it comes to being a rock hound, the thrill of the hunt doesn't always have to mean spending hours in the hot sun to find the perfect rock or gem. Instead, it can mean navigating dozens of people and tables at a rock show. And Friday through Sunday, July 31-Aug 2, the Prescott Gem & Mineral Club is having its annual show and sale.

Now in its 12th year, there will be new demonstrations along with the usual vendors.

Show Chair Melanie Capps said that the club itself started in 2001, with the show's inception not long after, adding that the club has grown to include over 300 members. And at the show, she said there will be more than 50 vendors coming from California, Nevada, New Mexico and Arizona. Nine of which, she said, have never been to the show before.

Apart from the vendors, Capps said there will be some child-friendly activities, including face painting and geode splitting, as well as new demonstrations never presented at the show.

"We're trying something new; we want some new venues so people can see what we do," Capps said. "We've had people ask for certain things and now we're doing it."

Demonstrations include an intarsia, which Capps said involves taking small pieces of polished rock and putting them together like a jigsaw puzzle into a pendant. She said it's like a mosaic. There will also be wire wrapping and a demonstration of a genie grinding machine, a tool that Capps said everyone into lapidary wants. Capps also spoke of a demonstration of "Beads to Buckskin," a type of Native American beadwork that involves a shaped and polished gem, known as a cabochon, beads and buckskin combined to make a pendant.

Capps said the show's vendors work with and sell everything from rough rock all the way to polished, finished jewelry and everything in-between.

"Just looking at some of this stuff - it's just gorgeous,' Capps said. "How this ugly, little rock can transform into this beautiful slab or jewelry."

The Prescott Gem & Mineral Club Show & Sale will be at the Prescott Valley Event Center, 3201 N. Main St., July 31 through Aug 2. Hours are 9 a.m. to 5 p.m. Friday and Saturday, and 9 a.m. to 4 p.m. Sunday. Admission is $5 for adults, $4 for seniors, veterans and students, while children 12 and younger get in free with a paid adult. Every paid admission receives a free raffle ticket with drawings every half hour.