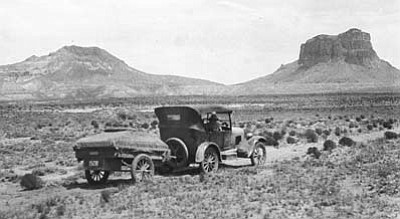 What started as a simple road trip for a college professor and his family in the late 1920s ended up becoming a picture of history and a story of Hopi life prior to World War II and the cultural changes that came after.

The correspondence that came from this picture, compiled by Carolyn O'Bagy Davis, make up the basis of the lecture Davis will give at the Sharlot Hall Museum on Saturday, July 25.

According to a press release by the museum, the letters describe the difficulties faced by the Hopi people during the 1920s and 1930s. These difficulties included poverty, crop loss, illness and disease.

However, the cross-cultural friendship formed during that summer that resulted in the letters crossed more than a continental divide.

"The letters and vintage photographs between Ethel Muchvo, a traditional Hopi housewife, and Maud Melville, a professor's wife from Warcester, MA, became an ongoing dialog of cultural sharing that spanned time and distance," the release said. "And created an enduring friendship."

Museum officials said the experience was life-altering for Melville, who wrote that "never in my life have I seen such a place," in a letter home.

Enchanted by things like woven plaques, wicker baskets, rattles and carved katzinas, Melville shared her discoveries through letters sent back home and where she also shipped more than 100 pounds of pottery.

The statement said that when she arrived back home, she gave presentations to clubs and churches, where she also sold Hopi arts and crafts.

"Hopi Summer" chronicles the dynamic between the cultures of New England and the harshness of Hopi life, with the correspondence conveying a "words-eye-view" of daily life on the First Mesa.

It presents the establishment of the establishment of decades-long familial dynamics along with an "evolutionary picture" of mercantile opportunities where the Melville family raised monies for the Muchvo family by marketing hand-made Hopi works and sending them them back to Massachusetts.

Admission to the lecture is free, and admission to other exhibits for non-members is $7.