Election Q&A: All agree with decision not to replace Hotshots 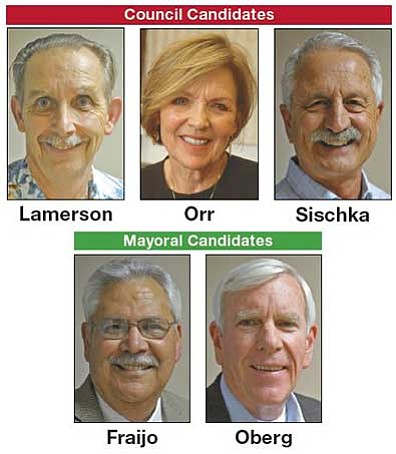 Among them: Would the Hotshot crew be replaced?

The city largely answered that question this year, when its fire department budget underwent a reorganization that eliminated the wildland division, along with most of the seasonal fuels-management staff positions. Fire Chief Dennis Light recommended at the time that the city contract out future large fuels-reduction projects to private enterprise.

And of the replacement of a Hotshot crew in Prescott? Light termed such a move "highly doubtful."

The candidates running for mayor appear to agree.

Although former Fire Chief and mayoral candidate Dan Fraijo said he sees a need for firefighting capabilities among the city's fuels-management positions, he stops short of supporting a full-fledged Hotshot crew.

"I don't think that we need a Type 1 Hotshot crew," Fraijo said of the elite interagency Hotshot status that the Granite Mountain crew had achieved.

Other candidates voiced support for the city's current direction, however.

Harry Oberg, the other candidate vying for the mayor's position, said he supports focusing more on homeowners' responsibilities to remove dangerous fuels (brush) around their homes. He also supports a collaborative effort to thin the forest, and possibly use the harvested trees for a wood-pellet industry, or a power plant.

The three candidates whose names will appear on the ballot for the three council seats also support the current direction, emphasizing Light's expertise in the matter.

"I think that Chief Light seems to have a handle on that," council candidate Steve Sischka said of the fuels-management direction.

Candidate Billie Orr maintained that "one of the most important things you can do is to educate people on how to keep the fire danger down around their homes."

And incumbent council candidate Jim Lamerson voiced concerns about "renting my firefighters out to Indiana, Oregon, or Colorado."

Light reported this week that the Fire Department currently has five positions dedicated to wildland fire abatement - one of which is vacant.

"Basically, we have two 'variable-hours employees' (the city's new term for seasonal workers)," Light said, noting that the two employees have been focusing on jobs such as picking up and chipping slash that has been removed from area properties.

"They have been finishing up loose ends," Light said. "They're not doing any imminent-danger jobs, no firefighting."

Indeed, the dangers of fuels mitigation work was central to the city's decision to move toward contracting out the work. Mayor Marlin Kuykendall said in March 2015 that he was "gun-shy" about the city's risk in the matter. "In our recent experience, that was considered hazardous duty," he said of the Hotshots' fuels-reduction work.

Along with the two seasonal positions, the city has three permanent positions devoted to wildland duties.

While two of the positions are filled, Light said the city is not recruiting to fill the third. A decision on that position likely will wait until after the city learns the outcome of the 0.55-percent sales tax increase that is on the ballot in August to cover unfunded liabilities in public-safety pensions. City officials have said a number of cuts would be necessary if the tax increase does not get voter approval.

Light says this year's wildland staffing level is fairly comparable to the same time last year. "It's almost apples to apples," Light said. "We had six last year at this time."

Mid-to-late-summer is typically the department's off-season, he pointed out, because monsoon rains have usually removed some of the wildfire danger.