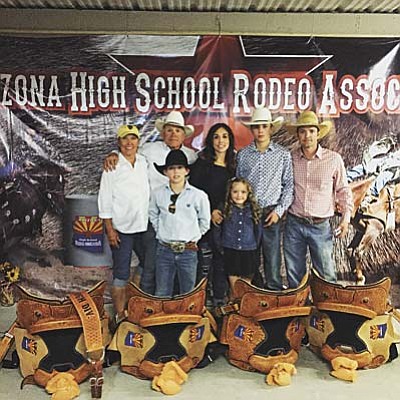 Courtesy photo<br /><br /><!-- 1upcrlf2 -->J.C. Mortensen, 14, of Chino Valley won four junior high state championships in the rough stock events in May, which qualified him for the junior high nationals in June in Des Moines, Iowa. In this photo from the state championships, J.C. is pictured with his family and grandparents with the saddles he won for each state title.<br /><br /><!-- 1upcrlf2 -->

About a month before 14-year-old J.C. Mortensen of Chino Valley traveled to the 2015 Junior High National Finals Rodeo June 21-27 in Des Moines, Iowa, his famous grandfather gave him some good-luck charms for the road.

Mortensen, who's named in part after his granddad, Prescott Frontier Days Rodeo General Manager J.C. Trujillo, picked out more than a dozen of Trujillo's older, snap-buttoned cowboy shirts while spending a week at his grandparents' Colorado ranch.

"They were shirts I was ridin' in, or they could be even older than that," Trujillo said in June. "But they were all in good shape. They've just been hanging there for a long time."

Trujillo, who has two daughters, didn't have the chance to do something like this when he was a young father. The teen-aged J.C. brought back the shirts to Chino, his mom Annie Mortensen (Trujillo) said, and wound up wearing one every day at nationals.

"He wasn't going anywhere without those shirts," Annie said in reflection in a phone interview from the Calgary Stampede rodeo in Alberta, Canada, Friday night. "They fit him perfectly."

As it turned out, the elder J.C. gave his grandson much more than those bright, colorful shirts with his initials, JCT, monogrammed into them. He shared his genetic gift for true grit, determination and athleticism in the rodeo arena.

"For me to have this boy working all the rough stock events and doing so well, it's been amazing," Trujillo said.

In 2015, J.C. advanced to the junior high state championships for the second consecutive season. At state in 2014, Mortensen won the title in bull riding, while one of his peers from Chino Valley captured the all-around.

"It's pretty amazing, because there are quite a few handy cowboys in Arizona," Annie said, "and in the last few years somebody from Chino has brought home the all-around."

Annie said her son has excelled in the sport because of the outstanding influences surrounding him. Judd Mortensen, J.C.'s dad who grew up in Dewey, is a pro bull rider who's currently a promoter for Professional Bull Riders (PBR). Then there's J.C. Trujillo, and former pro saddle bronc riders Steve Dollarhide and Justin Salcito, both from Arizona, who taught J.C. Mortensen how to ride broncs.

"He reminds everybody a lot of my dad and Judd," Annie added about her son. "He has a lot of both of them."

When J.C. was a baby, his grandfather started teaching him how to spur by putting him on his knee. Trujillo said the younger J.C. is further along in rodeo than he was at his age. Before J.C. could walk, he was dragging around a bull rope and wearing his spurs and chaps, Trujillo said.

Now that the 2014-15 season has ended, J.C. Mortensen this past week received a special invitation to attend the Calgary Stampede, one of the world's largest rodeos, for the second straight year. In 2014, J.C. took second at the Calgary Stampede in an amateur division.

Only three youngsters from the U.S. out of more than 60 internationally got the invite, and J.C. was one of them, Annie said.

This past week, J.C. rode in the novice bull riding at Calgary, which will help him prepare for competition in the high school ranks.

"J.C. has a good chance to win a state title in the bull riding all four years if he can stay healthy and keep his mind right," Annie said.

J.C. Trujillo, who attended the state finals in May to watch his grandson but couldn't go to nationals because of his duties at Prescott Frontier Days, beams when he hears the younger J.C.'s name.

"He's just been a phenomenal kid - it's hard to put it into words," Trujillo said. "He doesn't get a big head. He's got a great attitude, and winning is No. 1, of course, but he's such a great sport about it."