Column: Insects can benefit your garden 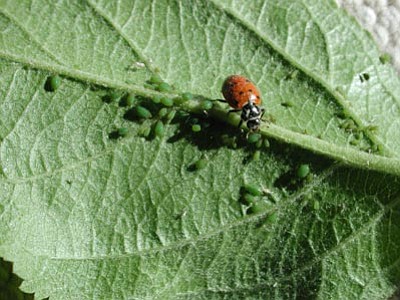 Arizona's insect diversity is incredible. In fact, they are the most common animals on our planet. More than 1.5 million species of insects have been named, which is three times the number of all other animals combined. Each year, new insect species are discovered. About 1 percent of the total species of insects are considered pests and negatively impact plant or animal health. The remaining 99 percent are either beneficial or benign.

Adult insects have three distinct body regions: head, thorax, and abdomen. Their jointed legs are attached to the thorax. Insects are invertebrates (lacking backbones) and have a hardened exoskeleton made of chitin (pronounced kitten with a long "i"). Insects range in size from wasps less than a millimeter long to long-horned beetles that reach up to six inches in length.

There are two distinct types of insect life cycles or metamorphoses. More primitive insects go through a simple metamorphosis. Here the egg hatches and as the insect grows, it molts passing through several nymph stages. The nymphs resemble the adult insect and generally feed on similar hosts to the adult stage. The adult is the sexually mature stage. Grasshoppers, crickets, cicadas, earwigs, termites, cockroaches, aphids, and true bugs have simple metamorphosis (also known as nonmetamorphosis).

More highly developed insects go through complex metamorphosis. Here the egg hatches into a larval stage that goes through several molts until it pupates (forms a resting body). The pupa stage does not feed. In the pupal case, the insect literally rearranges itself at the molecular level. When the process is complete, the adult insect emerges to find a mate. Butterflies are the classic example of this but flies, bees, wasps, and beetles also have complex metamorphosis. Remember the movie "Invasion of the Body Snatchers?" It was probably based on complex metamorphosis.

The most critical insect features to the backyard gardener are insect mouthparts. Sucking and chewing mouthparts are often used to consume our crops and ornamentals. Cicadas, aphids, true bugs, thrips, and whiteflies have sucking mouthparts that drain cell sap and transmit plant diseases. Grasshoppers, crickets, caterpillars, beetles, and borers have chewing mouthparts that remove large areas of plant tissue. Feeding habits create clues that help lead to proper identification of pests and sound decisions about what action to take if any.

Before taking any steps to manage an insect, it must first be identified. Look at the plant damage to determine if the feeding was by piercing/sucking mouthparts or chewing mouthparts. Insects with piercing/sucking mouthparts often cause leaves to be puckered or stippled. Chewing mouthparts consume portion of the plant. Sometimes small chewing insects "skeletonize" leaves eating the leaf blade but leaving behind the leaf veins. Look for signs of the insect - is there any excrement present. Are adult insects present? If so, how much damage are they causing? Many times we are offended by insects feeding on our plants, but the damage is nominal. If actual damage is less than 10 to 15 percent, it is best to observe for a few days more. Often predatory insects such as ladybird beetles, lacewings, wasps, assassin bugs, and others appear to feed on the pest insects.

Using pesticides without giving consideration to the amount of damage to the plant can lead to negative impacts on beneficial predators and pollinators that visit the area. Of course, insecticides are wonderful tools that have increased our ability to produce food and fiber and to help manage insects that vector human diseases. They have a place in our world and much research has been done to make them safer in the environment. If you do choose to use an insecticide, read the label, mix and apply it according to the label instructions, and use proper formulations for the plant or crop it is being applied to.

The more you learn about insects, the more respect you have for them. If you are not sure what a given insect is or what it might be doing in your garden or landscape, bring it to the University of Arizona Cooperative Extension Office. Our address is 840 Rodeo Drive #C, Prescott, on the Prescott Rodeo Grounds. Hours are Monday through Friday from 9 am to noon and 1 to 4 pm. You may also call 928-445-6590 or email PrescottMG@gmail.com. In addition to insect identification, we also answer general gardening questions.

Jeff Schalau has been the Agriculture and Natural Resources Agent with the University of Arizona Cooperative Extension, Yavapai County since 1999.

Insects: Which ones are truly pests?
Gardens home to both helpful, harmful insects
Safely manage insects on indoor plants
Ladybug, where have you gone? Aphid fighters tend to roam
Backyard Gardener: What’s up with the beetles that do headstands?