Chew on This: Food and memories at Olivas' Mexican Food 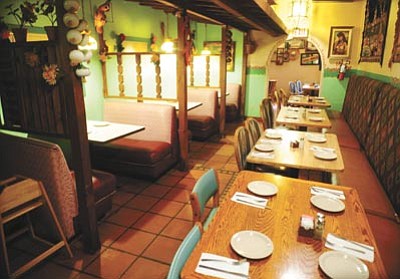 One of the several dining areas at the historic Oliva's Mexican Restaurant in Prescott Valley.

Sometimes the tastebuds crave something from way down south of the border. And when those Mexican cravings come crawling, one solution is Taco Bell. But an even better solution to satiate the taste for tacos is Olivas' Mexican Food, a restaurant that's been in Prescott Valley since the 1980s.

Owner Eileen Olivas said that she and her late husband, Ernest, had a restaurant in Phoenix almost 34 years ago after having worked at the original Garcias. However, she said that almost 27 years ago, they decided to come up to Prescott Valley.

"We just wanted to get out of Phoenix and to a small town with four kids," Olivas said. "We came up here and were looking around, couldn't find anything in Prescott and my husband found this building."

And it's no wonder why people keep coming back to Olivas' restaurant. Internet reviewers seem to enjoy it, giving it an average of three out of five stars from sites like yelp.com (41 reviews), tripadvisor.com (34 reviews) and zomato.com (nine reviews):

"One of my favorite (places) to go for Mexican food, hands down!! When my friends come up from the Valley, we go to Olivas. When my sisters and I get together, Olivas."

"With all my travels this is one of the top Mexican restaurants I've ever eaten at."

"This has become our family's favorite Mexican place in the Prescott area."

"If you're looking for some of the best Mexican food in the area, look for the 'Big Yellow A-Frame' which is Olivas'."

"This is my family's absolute favorite for Mexican food."

Of the regulars who continue to come back, Olivas said that she has young adults who come in and mention they remember eating there when they were kids.

"And now they bring their kids," she said. "And all of these teams I've sponsored over the years, they still go up there and look at their pictures, even though they're adults now."

Olivas said that the most popular entrée that the restaurant is known for is the Pollo Fundido (tender seasoned chicken in a burrito deep fried smothered with special cream cheese, cheddar cheese added and baked, served with rice, $12.25). There's also a Pollo Fundido lunch special for $8.75.

Other menu items include the Olivas' Combo (two mini tacos, two mini beef chimichangas, green corn tamale with melted chili and cheese, two mini chicken flautas and a dish of beans, $12.25), carnitas (lean pork strips marinated in sherry, grilled with bell peppers, onions and tomatoes, served with rice and warm tortillas, $12.25), taco burro (extra large burro filled with favorite meat, lettuce, tomatoes and cheese made enchilada style, $9.50) and Sonora Enchilada (two handmade corn tortillas topped with red sauce and cheese and baked, served with rice and beans, $8.50-$9.50). And those are just some of the specials. The restaurant also has dinner and lunch combos, soups, salads and huevos dishes, not to mention Taco Tuesdays, which Olivas said brings out quite a lot of people.

Olivas said that what keeps people coming back is both a mix of the food and the people who work there, stating "they come not only for the food, but for the atmosphere and we have consistent employees who are still a lot of the same people."