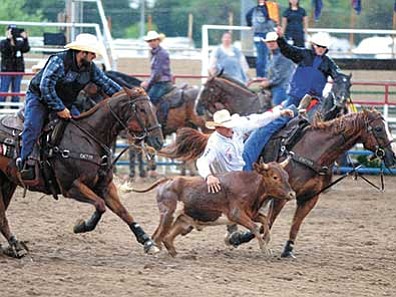 Les Stukenberg/The Daily Courier<br> Trevor Knowles of Mount Vernon, Oregon, was quick enough to place in the average during the final performance of the 2015 Prescott Frontier Days Rodeo Sunday at the Prescott Rodeo Grounds. Knowles did that, and then some, winning the buckle in Steer Wrestling.

Originally Published: July 5, 2015 11:07 p.m.
Tweet
PRESCOTT - Forty-five-year-old tie-down roper and steer roper Brent Lewis of Pinon, New Mexico, on Sunday won the second Prescott Frontier Days Rodeo All-Around championship buckle of his lengthy pro career.Lewis last captured the All-Around crown here in 1997, which at the time was six years into his first stint in the Professional Rodeo Cowboys Association (PRCA).What made Lewis' accomplishment at the "World's Oldest Rodeo" this past week so special was that he had retired from rodeo in 2005 only to return to competition in 2011. In 2015, his fifth year back in the PRCA, the 11-time National Finals Rodeo qualifier proved he still has something left in the tank.Lewis, who dethroned defending Frontier Days All-Around champ Rick Kieckhefer of Prescott (sixth place in three events in 2015), beat out his fellow All-Around competitors in steer roping and tie-down roping for a total of $3,244 in earnings.The Prescott rodeo, inaugurated in 1888 and known as the "World's Oldest Rodeo," has handed out an All-Around buckle every year since 1920. The coveted buckle is given to the rodeo athlete who wins the most combined money in multiple events.What follows is a rundown of the champions in each of the 2015 Frontier Days' eight events who were awarded buckles after the final performance on a rainy Sunday afternoon. BAREBACK BRONC RIDINGThanks to an 87-point ride on stock contractor Harry Vold's Excalibur earlier in the week, Winn Ratliff of Leesville, Louisiana, edged runner-up Wyatt Denny's 86 to win the bareback bronc riding buckle.Ratliff, 26, who finished seventh in the bareback riding world standings last year, had an outstanding payday of $6,430, while Denny took home $4,929.Going into Prescott Frontier Days, Ratliff had already won buckles at four other rodeos and a co-championship at another this year.BULL RIDINGKody DeShon, 29, of Idaho Falls, Idaho, stayed on a roll, winning his eighth buckle of the season with an 89-point ride on 4L & Diamond S Rodeo's Lil Tex here last week.On Sunday, Tanner Learmont of Cleburne, Texas, gave the upstart DeShon a run for his money, though, notching an 87-point ride on a bull named Break Down.DeShon was awarded $6,386 for his rides in Prescott. Learmont and 23-year-old Cody Teel of Kountze, Texas, a world champion in 2012 who also had an 87-point ride here, snagged $4,258 apiece.SADDLE BRONC RIDINGAnother upstart, 20-year-old Zeke Thurston of Big Valley, Alberta, Canada, registered an 85-point ride on Vold's Cactus Flower here last week to capture his fifth buckle of the 2015 season.Thurston, a PRCA rookie, nipped Cooper DeWitt, who had an 84-point ride here.Both of them got a sizeable chunk of change, however, as Thurston earned $5,668 and DeWitt garnered $4,346.SINGLE STEER ROPINGVin Fisher Jr. of Andrews, Texas, won the average, and thereby the buckle, in single steer roping with a combined time of 44 seconds on three head for $1,472 in earnings. Fisher, 34, an 11-time National Finals Steer Roping qualifier, finished fifth in the 2014 world standings.Fisher finished ahead of two locals here, including Kieckhefer, who took third in the average, and Chance Kelton of Mayer, who claimed fifth.This marked the fourth consecutive year that the single steer roping event returned to Frontier Days, beginning in 2012. Single steer roping was previously held here from 1982-85 before its discontinuation.STEER WRESTLINGTrevor Knowles of Mount Vernon, Oregon, who's made 11 straight trips to the NFR and finished sixth in the 2014 world standings, won the steer wrestling buckle here with a time of 9.4 seconds on two head to snare top honors in the average.Knowles, 34, earned $2,849 and overcame Charles Harris' 10.1-second average time ($2,478). TEAM ROPINGThe duo of Brady Tryan of Huntley, Montana, and veteran B.J. Campbell of Aguila, Arizona, won its third buckle of the 2015 season with an 11.8-second average on two head here.Tryan and Campbell, who's a three-time NFR qualifier, each snagged $3,880 in prize money with the narrowest of victories over the team of header Turtle Powell of Stephenville, Texas, and heeler Jonathan Torres, who tallied a combined 11.9 seconds in the average ($3,374).Record nine-time defending NFR All-Around world champion Trevor Brazile of Decatur, Texas, and his partner, Patrick Smith of Lipan, Texas, appeared in Prescott on Sunday but failed to score. Brazile also didn't score here in tie-down roping Sunday.TIE-DOWN ROPINGMarcos Costa, 24, a second-year PRCA pro from Childress, Texas, won the tie-down roping buckle with an 18.4-second time on two head in the average for $4,156 in prize money.Costa edged runner-up Jerrad Hofstetter, 31, a three-time NFR qualifier from Lubbock, Texas, whose 18.9-second time in the average earned him $3,614.WOMEN'S BARREL RACINGSherrylynn Johnson of Henryetta, Oklahoma, captured the Frontier Days buckle in women's barrel racing with a 34.75-second average on two head for $1,919. Johnson won the first round with a ride of 17.21 seconds and finished fourth in the second round in 17.54 seconds.Follow Doug Cook on Twitter @dougout_dc. Reach him at 928-445-3333 ext. 2039, or 928-642-7865.
Contact
Sign up for Courier e-News Alerts
Most Read
7 days
30 days