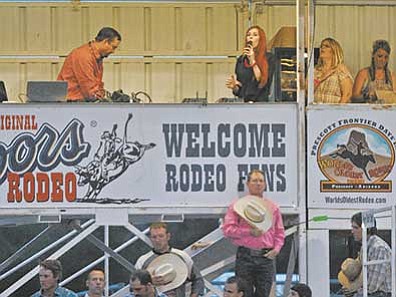 Performed before sporting events and when lowering the flag at night, The United States' national anthem, "The Star Spangled Banner" is a song that every American knows. But where there's a song to be sung, there's also a singer. And for this year's rodeo, there are about six different singers performing the national anthem: Belinda Gail, Marco Espitia, Merry Nebecker, Anna Nava, Jim Riley and his granddaughter Jamie Jeffries, who is coming back to Prescott from her life as a successful songwriter in Nashville.

Gail, who has been singing all her life and professionally for 20 years, said she has a ranching background and loves singing the national anthem because "lyrically it lines up with those ethics and values," she said, speaking of the patriotism, God and family in western music. "All the core values are in the music."

The recipient of the 2014 Western Music Award Album of the Year for "Granite Mountain," and featured in "American Cowboy Magazine's" collector edition "Legends" as one of the "50 Greatest Country and Western Singers.," Gail said she lives in Prescott and always tries to be home for the rodeo.

Viewing her singing ability as a gift from God, of which she feels a responsibility to share, Gail said that singing "The Star Spangled Banner" is not something she does by rote.

"It symbolically represents the heart of the country," she said, noting that, for her, singing it pays tribute to the veterans who have sacrificed for the country.

Like Gail, Jeffries was born and raised in Prescott and said she has always tried to stay connected with Prescott. Stating that her family has been a part of the rodeo for a long time, Jeffries said it has always been a lifelong goal for her to sing the national anthem at the rodeo.

Prior to her Tuesday night performance, Jeffries spoke of the nervousness she felt going into the performance, remarking that Tuesday was chosen to honor those fighting breast cancer as well as the Granite Mountain Hotshots. She spoke of being emotionally heightened.

And this return to Prescott, Jeffries said, was going to be different than any other return she's done.

"For me it's a really big deal," she said. "Personally, it solidifies that I am doing music professionally."

Nava, has worked for the VA in town for 16 ½ years and is currently a medical support assistant. She said this is her third year performing the national anthem for the rodeo. She said she got involved in singing it after someone had heard her sing with the Prescott Regulators.

A third generation Prescott resident, born and raised in the city, Nava said she has always had a passion for singing, mentioning when she sang downtown for Cinco de Mayo with a Mariachi band in 1981.

Nava called "The Star Spangled Banner" the "most beautiful song there is" adding that she sings it with a passion because she loves her freedom and she loves veterans. She said that when she sings, she always thinks of the phrase "if you love your freedom, thank a veteran."

"Because if it weren't for them, we wouldn't be free," she said.