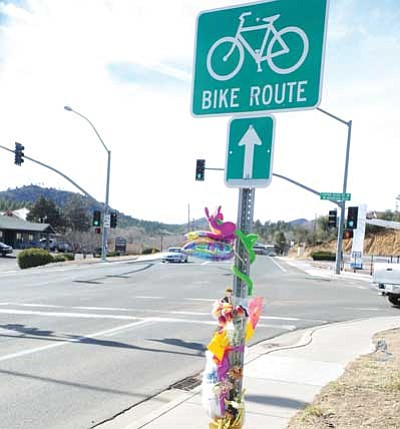 Les Stukenberg/The Daily Courier<br> Flowers and mementos decorate the Bike Route sign near the intersection of Copper Basin and White Spar roads in Prescott. The site is where Amber “Cricket” Harrington was killed on Jan. 16 while riding her bicycle.

PRESCOTT - A life-long bicyclist, Prescott City Councilwoman Jean Wilcox says she gave up riding on city streets when she moved to Prescott several years ago.

"I am too scared to ride on a paved street in Prescott," Wilcox said this past week. "This is one of the scariest communities to ride in."

Since moving to Prescott from Flagstaff in 2012, Wilcox says she has resorted to riding only on the recreational Peavine Trail because of the unsafe conditions on city streets.

Certainly, not everyone agrees. Russ Willis, the president of Prescott Alternative Transportation (PAT), says he uses a bicycle as his sole mode of transportation and regularly rides Prescott's streets.

Willis says a perception of unsafe streets prevails in Prescott for a number of reasons.

"Prescott is unfriendly in the sense that if I want to go somewhere, I have to use the major roads to do it," Willis said, emphasizing that he was speaking for himself only, and not for PAT. In many cases, he said, "There is no alternate back way to do it."

The two bicycle advocates agree, however, that measures could be taken to make the streets safer for all types of transportation - especially in light of the Jan. 16 bike/vehicle crash at the corner of White Spar Road and Copper Basin Road that killed cyclist Amber Harrington.

While no one can say for sure whether bike lanes would have helped to prevent the crash that killed Harrington, bike advocates say the incident serves to underscore bike-safety issues in the community.

In a PAT press release after the accident, Willis noted that he had yet to see a police report on the accident. But he added, "There is no reason a person on foot or on a bicycle should not be able to safely use the roads in this city."

He added, "There is no signage on that stretch of White Spar - and more to the point no pavement markings - alerting motorists to the presence of bicyclists on the road."

For years, bike lanes have been a hotly debated issue in Prescott. In the 1990s, the city agreed to include bike lanes in major street projects such as portions of the Willow Creek Road widening, and portions of the new Prescott Lakes Parkway.

But in later projects, such as the reconstruction of Copper Basin Road, bike lanes were excluded.

During budget deliberations this past May, Wilcox made a pitch to the City Council for a new half-time staff position that would focus exclusively on coordinating bike accessibility on city streets.

At that time, Wilcox said she found it "a little ironic" that the city touts itself as a mountain-biking destination and gives money to the spring Whiskey Off-Road race, when Prescott's streets are among the most "bicycle-unfriendly" she has experienced.

Other council members disagreed, however, and the position was not included in the budget.

Now, Wilcox said she plans to take a proposal to the council for a volunteer bicycle/pedestrian advisory committee, which would review new road plans and offer suggestions for how to make conditions safer for people on bikes or on foot.

"They would identify trouble spots," Wilcox said, adding that she hopes to take the proposal to the council by late February.