Column: Take your pick of USTA league play options in 2015 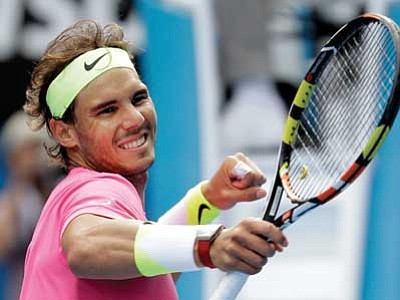 Bernat Armangue/The Associated Press<br> Rafael Nadal of Spain celebrates after defeating Kevin Anderson of South Africa during their fourth round match at the Australian Open tennis championship in Melbourne, Australia. Now how about a tourney near you?

Originally Published: January 26, 2015 11:11 p.m.
Tweet
You've seen the Northern Arizona and Prescott tournament and special event schedule that was printed in this column two weeks ago. Now we have the Northern Arizona USTA and BNP Team Tennis League schedule of various ability/age levels for all tennis enthusiasts 18 and over to give consideration to possibly joining.These leagues are much fun, and since the range of levels is from beginners to advanced players it's just a matter of finding enough tennis participants within each group to field at least two teams, and that includes other towns in Northern Arizona such as Flagstaff, Sedona, Cottonwood, etc.This league also needs people to step up to the plate to be captains or co-captains, which means they will set the schedule of play with the opposing captains, set a home site and time and put the playing roster together.Now a good captain would also find some additional times for the team to play/practice together and after the matches are over record the scores on the USTA website. It's nice to have a captain who is somewhat organized and enjoys putting teams and personalities together which can be a bit of an art. But to help the process we also have a wonderful local team coordinator, Diane Brock, to help guide each captain as needed.Your team will play on average at least six times or more (normally on weekends) depending on the number of teams involved; the team winning our local region gets to advance to sectional play which depending on the division might mean traveling to Tucson, Albuquerque, El Paso, Indian Wells or Phoenix. There are normally six regions in the Southwest Section competing in the sectionals.Sectional winners then advance to the national championships, which put you in an exciting elite group of players from around the country.I have been lucky enough to get to go through the whole process more than a few times and it's always been a very fun and memorable time that I'd highly recommend.The cost to join one of these leagues is fairly inexpensive. You need to be a USTA member and pay the league fee which I believe is $23, and each team needs to provide balls and then a playing site. If you qualify for sectionals there is another slight fee, normally around $25, and then travel/accommodation costs. The same for nationals if you happen to make it that far.Those are the nitty-gritty details. And now the schedule of different play and age requirements:Adult 40 +League Season Feb. 14-April 122 singles, 3 doubles matches. Team Registration: Jan. 31st. Player Registration: Jan. 31-March 28. Sectionals May 8-10, Tucson.Adult 18 +League Season April 25-June 212 singles, 3 doubles matches. Team Registration: April 11. Player Registration: April 11-June 6. Sectionals Aug. 7-9, Albuquerque.55 + 3 Court LeagueLeague Season June 27-Aug. 233 Doubles. Team Registration: June 13. Player Registration: June 13-Aug. 8. Sectionals: Sept. 18-20, El Paso.Mixed 18 +/40 + LeagueLeague Season July 15-Sept. 133 Doubles. Team Registration: July 11. Player Registration: July 11-Aug. 29. Sectionals: Oct. 2-4, Phoenix.Tri-LevelLeague Season Sept. 26-Nov. 153 Doubles. Team Registration: Sept. 12. Men's and women's teams. Player Registration: Sept. 12-Oct. 31. 3.5, 4.0, and 4.5 doubles teams advance to sectionals TBD and BNP Paribas Run Tournament.65 + Championships TournamentLeague Season Sept. 26-Nov. 153 Doubles. Team Registration: Sept. 12. Player Registration: Sept. 12-Oct. 31. Sectionals: Dec. 12-13.There will be a short meeting at the Yavapai College Tennis Center patio on Saturday, Feb. 7, at 1 p.m. for all interested players for all leagues listed above. If you cannot attend the meeting but would like to be involved, please email choward4541@q.com stating which league and ability level you are interested in.This is your year to get involved. Have some fun, meet some new interesting people, exercise and enjoy life to the fullest. Don't let yourself down.Join in!Chris Howard is a local USPTA Tennis Professional with over 40 years in the racquet and fitness industry. He can be reached at 928-642-6775 or chwoard4541@q.com.
Contact
Sign up for Courier e-News Alerts
Most Read
7 days
30 days