Calling all grandkids: Bring a grandma photo, get a cookie 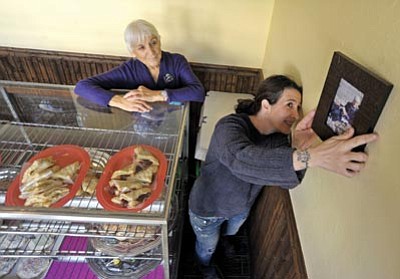 Matt Hinshaw/The Daily Courier<br>Geri “Grandma” Thomas looks on while Jessica Haggerty the new owner of Grandma’s Bakery hangs a photo of her on the wall Thursday afternoon in Prescott. Thomas retired from the Gurley Street business after 24 years and passed the reins onto Haggerty this past November.

Grama's Bakery in Prescott is a destination for those fortunate enough to have one of those stereotypical (in a good way) grandmothers who loved baking.

It was 24 years ago that Geri Thomas, after retiring as a photojournalist, and later retiring from a second career as a real estate agent, started selling her cookies, cakes and pastries to the Prescott public.

She's gone and retired, again - though you might still see the white-haired woman at Grama's Bakery. These days, she'll be on the other side of the counter, nibbling on treats like everyone else.

How's life after hanging up her rolling pin?

"Retirement has been a lot of fun," the grinning granny said, the other day. "Especially knowing the bakery was in good hands.

She shot a twinkling look at Jessica Haggerty, the having-the-time-of-her-life new owner.

Haggerty is a mom, but at 38 is a bit young to be a grandma.

Even so, the place below the Hotel St. Michael ballroom is staying Grama's Bakery.

Not only are Jessica and Ryan Haggerty - they met as Matt's Saloon bartenders, quite a Whiskey Row romance - keeping the name, they are asking people to bring in photos of their grandmothers.

In return for a 4 x 6 framed copy of your grandmother: You get a free cookie.

"We want to keep this Grama's Bakery," said Jessica Haggerty, "and since Grama is retired we would like to make it full of gramas!"

You can call it the "Grandmothers for Cookies Project."

Jessica recalled that, over a few months of the fall, she kept pestering her husband about asking "Grama" Thomas - she has 15 grandkids - about buying her place. "Go ahead and ask her," he finally said.

So Jessica Haggerty baked up some courage pie and asked Thomas if she might consider selling.

It was perfect timing, as, at 84 years old, Thomas was finding running the bakery to be too much work.

They struck a deal, and Haggerty took over on Dec. 1.

"I felt comfortable leaving Grama's Bakery - which had been my whole life for 24 years - because of Jessica's love of baking," Thomas said, nibbling on a snickerdoodle.

But is Jessica Haggerty up to Grama Geri's Prescott legacy?

And he would know.

For the last year, Hamilton has been coming to Grama's Bakery - "every day they're open."

He is more than satisfied with the changing of the guard. "My addiction is well supplied," Hamilton said, with a sugary smile.

Thomas also gives her successor the stamp of approval.

"Jessica puts new energy into some of the old favorites," she said.

"So instead of being tired, I've been able to retire - with a happy heart."