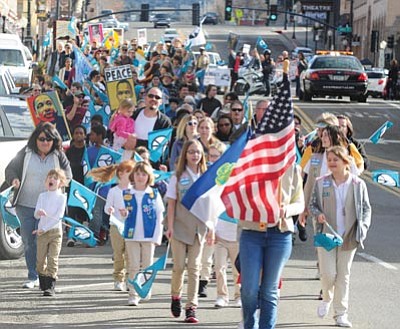 PRESCOTT - Channeling the service-to-humanity legacy of The Rev. Martin Luther King on Monday, sixth-grader Ethan Flinner opted against sleeping in on this national holiday.

Instead the blond-haired boy with a red-and-white checkered shirt laced up his sneakers and joined in for the second annual, 400-strong, multi-ethnic MLK Peace and Justice March that meandered just over a mile between Prescott College and the Prescott United Methodist Church. The 11-year-old did so not for a homework assignment but because he believes it is important to be a participant in King's dream.

"I'm in the march because I want freedom for everybody,' said the 11-year-old, who gathered with a mixed crowd of people of all ages, races, genders and generations at the church. "At least, I want to try and do something about it ... Yes, we might look different in skin, but that doesn't mean you're different in anything else.'

A fellow marcher, septugenarian Iris Wolfe, walking two large "peace puppies," shared a similar ideology, one that might be more mature yet still imbued with optimism and hope.

"It's about time we got past color; it's character and personality that count. Color (preference) is great when you're choosing paint for the walls of your apartment, but shouldn't be the criteria for judging any life."

St. Luke Ebony Christian Church marcher and event volunteer Nathaniel Simmons was elated with the attendance for the march and volunteer service fair, particularly with all the families that together waved their turquoise peace flags or hoisted banners with King's picture or some of his messages. Some even wore T-shirts inscribed with the name of the Nobel Peace prize winner's infamous speech, "I Have A Dream.'

"I think it's an awesome celebration of a great man,' said Simmons, 62, who also participated in the church memorial service inside the sanctuary that included a breakfast and a volunteer fair that allowed people to sign up to assist any of about 30 non-profit organizations.

For so many to champion the cause of peace and freedom for all Americans is a sign that "King's legacy is still alive and vibrant in this community,' march organizer Keith Cross said.

After the march, participants were treated to a memorial service filled with praise music, community accolades and reflections on King's sacrifices and strides. Two local residents, adult Frankie Reynolds and youth Jasper Hornberger, were honored as recipients of the first community Spirit of MLK award. Reynolds was honored for her civic contributions to Prescott shelter services and Hornberger for his work with the Boys to Men mentoring program.

In a rousing keynote address, the Rev. Michael Cannon of St. Luke Ebony Church asked every one to state aloud, "It's not too late,' and then pushed them to follow King's lead.

Cannon praised King for faith that persevered against the odds, and a humble leadership intended to set a path for those to come. The preacher assured that King's position at the front of every march in which he participated was intended "to serve the humanity coming behind him.'

With strangers raising clasped hands together, the service closed with the familiar hymn, "We Shall Overcome."