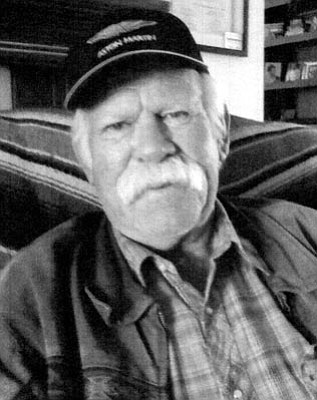 Lonnie Ray Vaughn was born Dec. 10, 1946, in Rosiclaire, Illinois, and later lived in Tucson, Southern California and, finally, Chino Valley, Arizona. He passed away on Jan. 4, 2015 in Chino Valley.

He began working with horses at an early age and his love for them is what originally brought him to the Prescott area when he was a teenager. He spent summers working at the Prescott Racetrack at the rodeo grounds and went on to rodeo throughout the United States; his favorite event was bulldogging, in which he excelled. He worked as an animal wrangler and stuntman in movies and television, and was proud to have had lines and played cards with John Wayne on the set of the movie "Rio Lobo." He went on to a career in heavy construction working as an operating engineer for Local 12 out of Los Angeles, from which he retired in 2008.

His dream to leave the city and retire in the country was realized in 2009 when he moved to Chino Valley, where he found his niche. He was happiest there than he had ever been, working with horses, taking care of his property and making friends with many like-minded "cowboys."

He leaves behind his wife Cindy, with whom he celebrated 30 years of marriage in October; son Lonnie Joseph Vaughn; daughter Kelli Raye Smith; and grandchildren, Trinity and Calista Smith. He also leaves behind his constant companion, his blue heeler, Scooter; and his beloved thoroughbred, Double Ott.