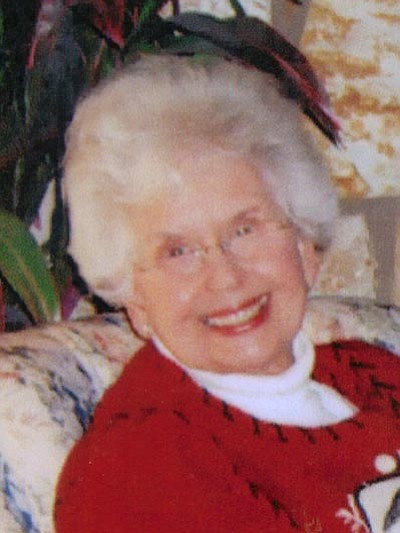 Vida Elizabeth (Betty) Sischka peacefully entered into eternal life on Nov. 29, 2014, with a radiant smile on her face.

She was raised in St. Louis, Missouri, with her brother John, and eventually attended Washington University School of Fine Arts. During this time, she met the "love of her life," Fred Sischka, whom she married in June 1942 while he was still serving in the U.S Army. She wrote in her memory book that "this is the beginning of my life."

After World War II, Betty and Fred stayed in St. Louis for a few years. Soon, a new job for Fred with AT&T moved them to San Francisco, California. They resided in Palo Alto, California, where they happily raised their five children.

Betty was a devoted wife and mother. Her passion in life was her family and her faith. She helped create a solid foundation for her children and was kind, caring, compassionate and always loving. She was a true homemaker, a talented seamstress, a gifted artist and gardener. She had many good friends and loved music and dancing. Additionally, she generously volunteered her time at St. Albert the Great grammar school and at Stanford Hospital.

After the loss of her beloved Fred in January 1991, Betty eventually moved to Prescott, Arizona, to retire. She was delighted to be near her sons Steve and Robert, who were both living close by with their families. She had many friends in Prescott and was very involved in the Prescott Fine Arts Guild and in parish life at Sacred Heart Catholic Church.

For Betty, life was an adventure, and she loved to travel often with family and friends to new places. Her trip to the "Holy Land" was a profound experience for her, and one that she spoke of often.

She participated in the lives of all her grown children and their families, and one of her great joys was becoming a grandmother and a great-grandmother. She chose to be called Mimi by her grandchildren and she visited them often and attended every graduation, wedding and event possible over the years.

At 93 years of age, she would often look back in amazement at what a wonderful, full and rich life she had, and was so grateful for her many blessings. Her faith and love for God helped her endure her most difficult times and challenges and rejoice in the amazing life she lived.

She was a special gift to all who knew and loved her and truly taught us about a life well lived. She will forever be in our hearts.