Winter MusicFest is Jan. 6-11; bringing NYC to the Red Rocks of Sedona 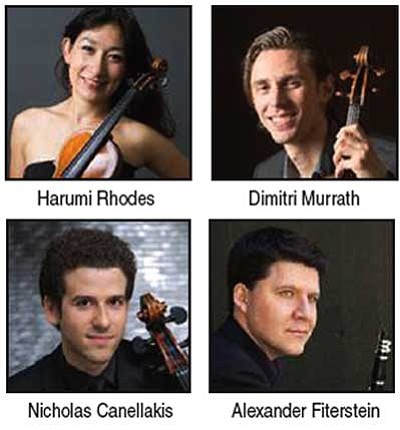 SEDONA - The Winter MusicFest, Jan. 6-11, will bring six of this generation's most engaging musicians to Sedona for six days of entertainment, education and exhilarating concerts led by cellist Nicholas Canellakis and clarinetist Alexander Fiterstein, who will be joined by four musical colleagues.

The Festival begins off 4 p.m. Tuesday, Jan. 6, at the Mary D. Fisher Theatre, home of the Sedona International Film Festival (SIFF), with a screening of "A Late Quartet" directed by Yaron Zilberman. Festival cellist Nicholas Canellakis will host the event and talk about coaching actor Christopher Walken in his role as cellist Peter Mitchell. The film explores the struggles of a world-renowned string quartet to stay together in the face of death, competing egos and insuppressible lust. The film stars Catherine Keener as Juliette Gelbart, Christopher Walken, and Philip Seymour Hoffman as Robert Gelbart. Tickets may be purchased by calling SIFF at 928-282-1177.

Wednesday, Jan. 7, at 5:30 p.m. Canellakis, Fiterstein and pianist Michael Brown will be featured artists during a 5:30-7 p.m. Salon Concert at one of Sedona's most beautiful homes in the Village of Oak Creek. The evening will include lite hors d'oeuvre prepared by Heartline Café and wines from Arizona Stronghold Vineyards. Reservations are required and the event is limited to 35 guests. Tickets are $100 per person.

On Thursday, at 7 p.m. at the Jewish Community of Sedona and the Verde Valley Synagogue, five festival artists will perform the first public concert - KLEZMER! The evening will include traditional Klezmer music, led by clarinetist Alexander Fiterstein.

Saturday from 10 a.m. to 3 p.m., Sedona and regional music students, grades 8-12, will be given a hands-on opportunity to work with the Festival sextet at the Hilton. From 10-11 a.m. a free open rehearsal, open to the public, will take place previewing the Sunday concert.

Sunday, 2:30 p.m. at the Hilton Resort and Spa, the Festival Sextet will perform its final program - THE AMERICAN EXPERIENCE featuring music by George Gershwin.

Each festival concert will be preceded by informal talks with Festival artists and guests. For info, contact the Chamber Music Sedona office at 928-204-2415. Concert tickets may be purchased now online at the Festival website, SedonaWinterMusicFest.org.