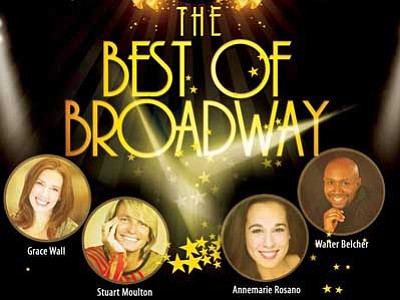 It's not just one singular sensation, but a thrilling combination of Broadway music returning to Prescott on Thursday, Feb. 26. Held at the Elks Theatre and Performing Arts Center, "The Best of Broadway" will feature four vocalists supported by a five-piece band performing a mix of old classic and contemporary hits.

One of the vocalists, Stuart Moulton, is a singer, dancer, actor, director, choreographer and producer based in New York City. However, Moulton said he did a lot of shows in Tucson with Lonely Street Productions' music director/arranger, Khris Dodge, for four years quite some time ago. And when he was asked to come back and direct "Forever Plaid," Moulton was told about the Broadway revue.

"It was just one of those wonderful alignment of planets," Moulton said, stating that Broadway music his is go-to genre, having done it for pretty much all his life.

Moulton called the show a fun walk through musical theater, stating that there is a good variety to the show. He said people who know the classic Broadway shows will enjoy it along with those who are die hard musical theater buffs who are familiar with the more challenging pieces from shows that are not as well known.

"For those true aficionados, they are wonderful arrangements," Moulton said.

As with every Lonely Street Productions show, "The Best of Broadway" takes the audience on a trip of nostalgia. And this one is no different, with songs from every decade of Broadway, from "Oklahoma" and "West Side Story" to "Les Miserables" and compositions by Andrew Lloyd Weber. Moulton said older audiences will love the beauty of "The Sound of Music" and "West Side Story." On the other hand, younger audiences will enjoy the "classics that got them to love musical theater," Moulton said. "It goes through multiple generations of theater history."

Khris Dodge, music director and arranger, said that in putting the songs together, he looked at the big picture. He said that a Broadway revue like "The Best of Broadway" needed the same flow as an actual show without having a plotline. So he chose from the biggest and the best.

Dodge said the show accentuates the beauty and variety that Broadway brings, adding that there were hundreds of songs that could have been chosen.

"These songs are performed well out of context," Dodge said. "They can stand alone."

Moulton said his favorite pieces to perform include "Luck be a Lady," adding that he is sure that he has never performed the song publicly before. Moulton said the song crossed lines from Broadway to the popular charts and had no idea that it was so much fun to sing.

Moulton also said he loves performing "Maria," but noted he wasn't too thrilled about singing it until he heard the arrangement. The 50-plus-year-old song was given a "beautifully warm contemporary edge without losing its classic charm," Moulton said. "It allows me to have a little different interpretation."

"The Best of Broadway" will be at the Elks Theatre and Performing Arts Center, 117 E. Gurley St. The show starts at 7 p.m.

Tickets are $25 for adults, $22 for seniors and $30 for opera boxes and can be purchased online at www.prescottelkstheater.com or by phone at 928-777-1370. Tickets are also available at the door one hour prior to performance.