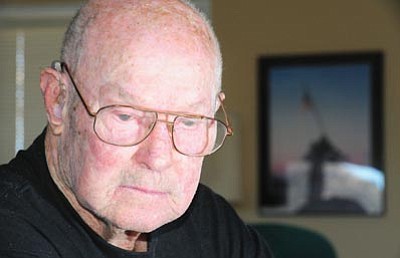 Les Stukenberg/The Daily Courier<br>Retired Master Gunnery Sgt. Marion Branch talks about his experiences while in the United States Marine Corps and specifically about the battle of Iwo Jima.

PRESCOTT - At 96, retired United States Marine Master Gunnery Sgt. Marion Branch still has nightmares of the horrific, and unforgettable sights and sounds he endured in World War II's bloodiest battle on a small island far from his home state of Kansas.

With his still razor-sharp memory, the career military man and retired federal corrections officer recalled the invasion of Iwo Jima launched on Feb. 19, 1945, the longest battle in the Pacific theater that lasted more than a month and killed 6,281 and wounded 19,217.

From his position at sea with the Fifth Marine Division amphibian forces that shipped out from Pearl Harbor in mid-January, Branch said he witnessed a slaughter like no other in the war.

"I could see Marines hit the beach and fall,' said Branch of the "shelling' that started just after daybreak with aircraft bombings following a couple hours after. "The beach was just full of dead Marines floating in the water.'

Aboard a Coast Guard LST artillery ship, Branch said he and his crew were slated to land later that fateful morning; the then-mess sergeant for the 1155 gun battery pinpoints the location on a map of the pork-shop shaped island with the volcanic mountain on the southern end. But the ship was hit by Japanese gunfire, striking the ammunition area, forcing it back out to sea, with Branch and his shipmates fearing death from a ship explosion.

"I didn't figure on coming back,' said Branch, who is somewhat hard of hearing but can still delineate exact strategic positions on a map of Iwo Jima he unfurls on the dining room table in the local home he now shares with his son, Kevin. The long-divorced Branch also has a daughter, Candace.

After extensive repair, Branch said the ship again headed for shore, deploying onto the island on the fifth day of fighting, just one day after the raising of the American flag on Mount Sirabachi, the photographic image of which proved a national rallying cry for the war effort.

"I was pretty happy,' Branch said of spotting from his vantage the large, American flag waving high above the island on what he calls "D +3.' "Everyone (on board) fired off a salute.'

Flipping through an assortment of official black-and-white Iwo Jima battle photographs, Branch recalled how he had no "job' assignment once they landed.

"We didn't have any cooking equipment so I worked with the corpsmen picking up bodies,' Branch said as he winces with his still quite vivid memory of placing them inside mattress covers for burials. "I saw truckload after truckload of Marines going to the cemetery. Sometimes I'd go up to the cemetery and there would be 200 waiting to be identified and buried.

"...I don't want to get into all that gruesome stuff. But it wasn't pretty.'

On one of his early days on the island, Branch said his unit was forced to burn up their guns for fear that the Japanese would somehow commander the weapons. He recalled one day hearing what he thought to be thunder but was actually an explosion that dropped shrapnel all around where he was; he recalled sleeping in bomb crates because there was no way to dig a foxhole in that terrain.

Branch still keeps a small vial of the black Iwo Jima sand as one of his war souvenirs.

"We had no place to go. You couldn't dig on that island,' said Branch, who for years stayed silent about what he endured and witnessed in that faraway place that in his dreams is still too close for comfort.

"I had so many scary days it wasn't even funny. I would get so scared I couldn't talk.'

Surviving the unthinkable, the long ago Kansas youth who joined the federal Conservation Corp in 1936 before joining the Marines in 1941 departed Iwo Jima for Guam. All told, Branch spent three decades in the Marines; three tours in Vietnam before his retirement in 1971.

"And I never fired a shot,' said Branch, who after the service spent another 10 years as a federal corrections officer in Lompac, California.

Seventy years after the Iwo Jima battle, Branch remains humble about his service as he suggests the sacrifice of more than 20,000 men far surpasses his role. His son, a 59-year-old history buff retired from the bio-medical technology field, said World War II was a defining time in our nation's history, one of immeasurable tragedy.

"If you look at the whole war, it was terrible,' Kevin Branch said. "There is no way to understand how bad it was unless you were there.'

He then nods at his father who still keeps his dress Marine uniform hanging in the closet.

"The fact you showed up is hero enough,' his son concludes.