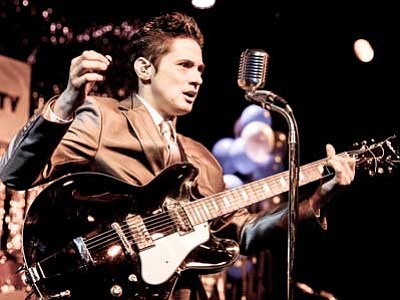 Don't stay too long at the malt shop because the teen idols live again as Lonely Street Productions presents "Travelin' Man" on Sunday, Feb. 22, at the Elks Theatre and Performing Arts Center. Starring Nick Gallardo, the performance celebrates the music of Ricky Nelson and other teen idols of the '50s and '60s. The show also marks a celebration of the Elks Theatre's 110th anniversary.

Gallardo, who grew up in Tucson, has performed in other Lonely Street Productions such as "A Swingin' Christmas" and "Rave On!" He said he didn't grow up with the type of music he performs in the show, but noted it's been interesting to play it with a clean slate.

"I'm coming to love each song individually," Gallardo said, noting the set's repertoire varies from the younger to older years.

As with every show put on by Lonely Street Productions, the music takes the audience back to nostalgic days gone by. And Gallardo said this show is catered toward those who grew up listening to teen idols like Nelson, Fabian, Bobby Rydell and Paul Anka. Among the songs to be performed at "Travelin' Man" include "Tiger," "Fools Rush In," "Puppy Love," "Put your Head on My Shoulder," and the very song the show takes its name from.

However, Gallardo added that he finds the songs to be transcending, especially with their sentiments and charms. He stated that the production has something for everybody and said he even has been enjoying the songs in rehearsals. But, he noted there are too many to name as a favorite.

"We're having a good time rehearsing it," Gallardo said. "And I can't wait to share it."

The hits roll at 7 p.m. at the Elks Theatre and Performing Arts Center, 117 E. Gurley St.

Tickets are $25 for adults, $22 for seniors and $30 for opera box seats, and are available online anytime and at the door one hour prior to performance.