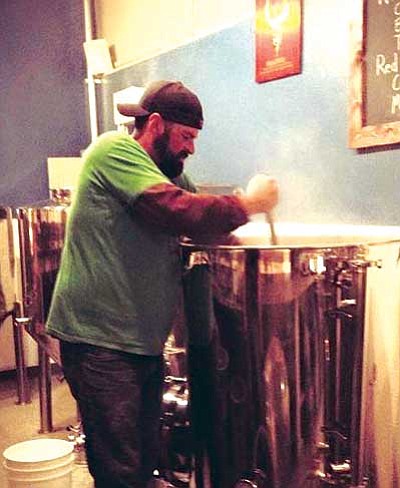 Grab a pint of local craft brew and head on over to one of Prescott's breweries, because it's time once again to celebrate Arizona Beer Week. Running for 10 days this year, from Thursday, Feb. 12, to Saturday, Feb. 21, most of the area's breweries are taking part with their own specials or special events.

Robert Fullmer, executive director of the Arizona Craft Brewers Guild, said Beer Week has been going on for half a decade, after starting due to the influence of beer weeks in other cities and states.

"As a guild, we wanted to be able to unite a people together," Fullmer said. "So we decided to make it a statewide event."

And Prescott Brewing Company has taken part in Arizona Beer Week ever since its inception, said co-owner Roxane Nielsen. She said there have been a couple of times the brewery has done a few different kinds of promos, but stated every year, it has done Apps & Taps. And this year, it's continuing to do so again. Every day of Beer Week, Prescott Brewing Company runs a different kind of appetizer with a beer base, be it breading, a sauce or marinade, alongside a beer of the patron's choice. The coupling is $9.99.

"I was trying to think of a daily thing rather than one event," Nielsen said. "It's fun and not expensive and it's a chance for our chef to be creative."

But Prescott Brewing Company isn't the only brewery that's getting in on the action. Granite Mountain Brewing is participating for its third year, after having opened two and a half years ago. Granite Mountain will have guest taps that focus on microbrews that can't be found anywhere else in the area, including brews from Historic Brewing in Flagstaff, The Perch in Chandler, and Bold Barley Brewing in Phoenix.

"Everyone's known us since we opened two years ago," Yamamoto said. "It's our relaunch."

Also participating is Black Hole Beer Company. Co-owner Eric Marichal said there will be four different events. On Friday, Feb. 13, it will host a meetup of the Facebook beer lovers group, What Tappend Prescott. Tuesday, Feb. 17, at 6:30 p.m. will see Chef Harley Ray Guy pairing five courses with five beers from Oskar Blues. Tickets run $50 per person and can be purchased on www.blackholebeercompany.com. And on Thursday, Feb. 19, the brewery will ring in the Chinese New Year with special Chinese beer and appetizers and pair four different beers with four different cheeses on Friday, Feb 20.

Finally, Michael Williamson said The Raven Café will have 30 rotating taps from 20 different breweries, all from Arizona. And some will be sponsored, like Phoenix Ales on Wednesday, Feb. 18, and Mudshark Brewery on Friday, Feb. 20.

Williamson said the brews at The Raven are unique beers just for Beer Week.

However, just because everyone is doing something different, that doesn't mean spending all that beer money in just one place.

Nielsen said that Arizona Beer Week celebrants should patronize all of the area's breweries. And Marichal echoed that sentiment.

"Pretty much go everywhere, that's why it's a week event," Marichal said. "You have nine days."

• Granite Mountain Brewing is located at 123 N. Cortez St., can be found online at www.granitemountainbrewing.com and called at 928-778-5535.