How much is that museum in Dewey-Humboldt? 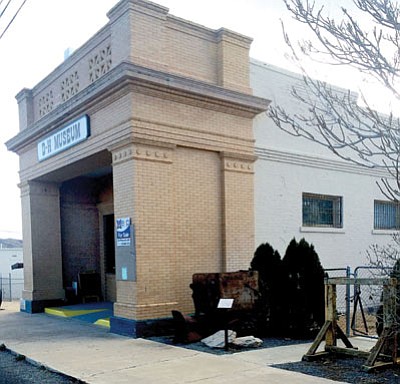 Trib Photo/Briana Lonas<br /><br /><!-- 1upcrlf2 -->The Dewey-Humboldt Historical Museum, housed in a 1918 former bank, is up for sale. The D-H Historical Society rents the building from Gateway Baptist Church, and is looking to the town council for help.

The Historical Society has rented the 1918 building for about three years, knowing its former occupants and owner, Gateway Baptist Church, could sell it at any time, said GBC Pastor Steve Lain.

"It has always been our intent to sell," Lain said, adding that he was happy to help get the museum off the ground. "But we can't wait forever."

David Nystrom, Historical Society secretary, submitted a request in mid-January to place a proposal on the agenda for council to discuss. (It may appear on the March 3 meeting agenda.)

The proposal, first suggested by former D-H mayor Earl Goodwin, is to have the town take over the museum's right of first refusal and buy the property outright or enter into a long-term lease agreement with the owner. The town currently pays the church $600 a month for rent by way of a $7,200 grant to the Historical Society.

Nystrom included six reasons why he felt it would be advantageous to the town and the Historical Society if the town accepted the right of first refusal:

• Current attraction of visitors to the museum.

• Most small town museums are owned by towns, staffed by volunteers.

• Possibility of long-term lease agreement if town purchased the building.

• With the building secured, Historical Society could spend more on promoting the museum.

The proposal would not have a budget impact, Nystrom told the council at the Feb. 3 council meeting.

Lain indicated that a couple of people have looked at the property; one person looked at it multiple times.

"They are serious," he said.

Although Nystrom's proposal wasn't included on the agenda this past week, he and several other museum supporters spoke during the comments from the public portion of the meeting.

D-HHS Vice President John Young said visitors walk into the museum and immediately start asking questions - even people who live in town. He said he has spent up to an hour and a half with visitors making sure their questions are answered.

"All the displays connect to the town," Young said, adding that historian Sharlot Hall had connections to the area, having once resided on property that is now Orchard Ranch Mobile Home Park, which she referred to as Dewey.

D-HHS board member Sue Palacio talked about the accomplishments of the Historical Society, including Pioneer Day at Humboldt Elementary School that takes place this year on May 8.

"It is the obligation for all of us to keep the history of Dewey-Humboldt alive for generations to come," Palacios said.

The Historical Society boasts about 100 members, with dues of $15 per year for individuals, $25 for families. It is located at 12925 Main Street, Humboldt.