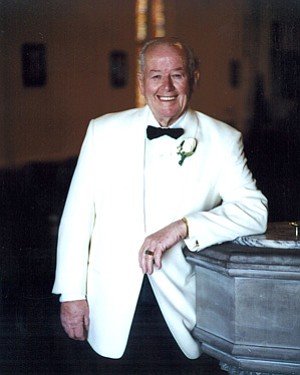 Russ was born March 10, 1921, in Pawhuska, Oklahoma, and grew up in Carson City and Prescott. He briefly attended the University of Arizona on a tennis and golf scholarship. He served in the U.S. Army during WWII, stationed in Le Havre five days after D-Day. In 1951 he settled in Santa Clara, California, where he ran Western State Stone Company until he retired in 1996.

Russ enjoyed sports and was an avid golfer before his health declined and could be found on many golf courses throughout the San Francisco Bay Area. He took great pleasure in the San Francisco Giants' three recent World Series wins.

In lieu of flowers, donations may be made to Nevada Humane Society, Carson City. Russ' loving and generous heart will be missed.